Nice to see you again! Back in the middle of April, WWE released dozens of names from their contracts, sending several careers into chaos. With so many wrestlers suddenly free agents, the interesting question became where would all of these people be winding up. There were a lot of companies out there who would be interested and now another big name seems to have found a new home.

There were several surprise names released from the company and Zack Ryder was near the top of the list. He was one of those guys who seemed to be a lifer for the company but was let go just like so many others. Ryder was going to be the kind of guy who could offer a lot to several companies and now one of them seems to have picked up what could be a big time free agent.

This week on AEW Dynamite, Ryder, now under his real name of Matt Cardona, made his debut with the company. Cardona saved Cody from a post match beatdown at the hands of the Dark Order, with Cody seeming surprised to see him. Cody and Cardona have been known to be friends behind the scenes and Cardona has been rumored to be signing with AEW since his release.

He could be quite the asset. Check out what AEW is getting:

Opinion: I can’t say I’m surprised by this one and that’s still a nice feeling. Cardona could be quite the signing if he is motivated and gets to show what he can do. The fans are going to respond to him and Cardona has shown that he can do some things without WWE’s full backing. If that is what AEW is getting, they are going to be in for something pretty special in a hurry.

What do you think of the signing? What will Cardona do in AEW? Let us know in the comments below. 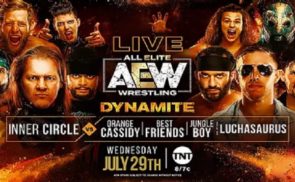