We’re coming up on Hardcore Justice and that means a lot more Tommy Dreamer. It fits a bit better this time around but that doesn’t exactly make things all the more interesting. I’m not entirely sure what we are going to get for the show, but until then we are in for a lot more Kenny Omega as the harvesting of Impact continues. Let’s get to it.

Non-title and Havok/Nevaeh seem to be fine after some recent issues. Kiera talks a lot of trash to Havok to start and is launched across the ring. A backbreaker gets two on Kiera and it’s off to Nevaeh. That means a trip into the corner so Nevaeh can hit a Hennig necksnap for two.

Havok comes back in and gets sent into the corner, setting up a running boot to the face. The chinlock doesn’t last long so Kiera goes up, only to be pulled out of the air for a slam. The hot tag brings in Nevaeh as everything breaks down. Havok’s sitout powerbomb gets two but Tasha is back with a cutter. A frog splash finishes Havok at 7:18.

Post match Nevaeh turns on Havok and beats her down to end the team.

James Storm is ready for his 1000th match in Impact tonight. Storm talks about how Bob Ryder kept saying Storm and Chris Harris had something special and made sure they were on TV. Tonight Storm is ready for Eric Young and has some friends. Chris Sabin comes in and he has a surprise: Harris is here too, and it’s time for a friendly reunion.

Deonna Purrazzo and Susan hate Jazz did to Kimber Lee and swear revenge. Jazz runs in to beat them both down.

Acey Romero is here with Larry. Sami goes straight at him to start and knocks Larry out to the floor. A dive is cut off and Sami is sent into the apron so we can take a break. Back with Larry knocking Sami outside again and sending him into the post. They go back inside with Larry hitting a hard clothesline, causing Striker to ask “is there a cover in Larry D?”

Sami gets up and catches Larry on top, meaning it’s a Death Valley Driver for two. They head to the apron where Larry blocks a piledriver so Sami slips back inside to rake the eyes with a bit of fiendish gleaming. Sami hits MJF’s Heatseeker (a jumping hanging piledriver) for the pin at 8:44.

Kenny Omega, Don Callis and the Good Brothers are not happy with FinJuice. They’re about to watch the One Winged Angel video again, but Omega and Callis have an idea for the Brothers.

Sami Callihan talks to Trey Miguel about pushing him to his limit. Trey needs to use his anger to put himself on a new level. Sami claims credit for Trey’s success and wants them to team up against XXXL next week. That’s a no, but Sami says think about it work a week.

Suicide grabs the arm to start and we’re in a quickly broken Octopus. Myers slips out and hits him in the throat, followed by a Falcon Arrow for two. A Rock Bottom sets up the Roster Cut to finish Suicide at 2:53.

Post match Myers talks about Matt Cardona’s challenge to a match, which isn’t going to happen because this is Myers’ place, not Cardona’s.

Jazz comes up to Tommy Dreamer and wants to face Deonna Purrazzo. Dreamer brings up ECW’s Ultimate Jeopardy match, which we can bring back with a title vs. career match at Hardcore Justice. Works for Jazz.

Tony Schiavone and Tony Khan preview this week’s edition of AEW Dynamite. Khan rants about how annoying Kenny Omega is but makes sure to hype up his six man tag this week. This sends Khan sailing into a rant about how he is the professional wrestling world and the Forbidden Door. Khan talks about some more of the card, with Schiavone wrapping it up.

We go to Swinger’s Palace, where Johnny Swinger won’t let John E. Bravo use the restroom. Don Callis and Kenny Omega come in to ask about some action on Omega vs. Rich Swann. They even show the One Winged Angel video, which is enough to sway the odds. Callis puts down a $20,000 bet on Omega.

Alexander and TJP argue over who gets to start with Fulton, who eventually throws Alexander around to get going. Austin comes in for all of a few seconds before Fulton comes in so Alexander can grab a headlock. That’s broken up so Alexander hits a top rope shoulder to drop the monster again. It’s back to Austin, with Alexander taking him down in a hurry. Everything breaks down just as fast with Alexander getting mad at TJP for helping him. That’s fine with TJP, who tags himself in and gets taken down into Austin’s chinlock.

Fulton adds a middle rope choke and we hit the chinlock again. TJP breaks that up in a hurry and the hot tag brings in Alexander to clean house as everything breaks down again. Alexander seems to take a shot to the eye though and splashes TJP in the corner by mistake. Austin kicks Alexander in the face for two but he’s right back with a Regal Roll. TJP tags himself in again and hits the Mamba Splash but they fight over the cover. During the confusion, TJP gets rolled up for the pin at 9:12.

Don Callis comes up to Willie Mack and talks about bringing Mack into the company. He shows Mack the One Winged Angel video but Rich Swann comes in. Callis: “Kenny loves your finishing move and can’t wait to kick out of it.” Swann talks about his heart and says he would slap Callis’ glasses off if Callis wasn’t his boss. That’s fine with Callis, who isn’t his boss for the next ten minutes. Cue Kenny Omega and the Good Brothers for the beatdown but Eddie Edwards and Mack make the save to clear the room.

Coming soon: something that doesn’t have all of the letters in its name.

Rohit Raju comes up to Hernandez and suggests the team name Indian Latin Xchange. Hernandez just cares about money and tells Raju to go get some.

Violent By Design is ready to beat James Storm in his 1000th match tonight. They have all been cleansed by the violent water of change.

Tommy Dreamer has a talent meeting for Hardcore Justice. Deonna Purrazzo is ready for Jazz and leaves, but Dreamer talks to Susan about Su. She has no idea what he means and Purrazzo pulls Susan out. Dreamer announces a multi-woman Knockouts scramble where anything goes for a title shot at Rebellion. Some of the women are more pleased than others.

Here’s what’s coming next week and at Hardcore Justice.

This is Storm’s 1000th Impact match and Violent By Design, Chris Harris, Jake Something and Chris Sabin are all here. Feeling out process to start as Striker says Storm is the best tag team wrestler in Impact history. Striker: “There. I said it!”  We take a break and come back with Young getting two as Storm has to grab the rope. Young chokes on the rope as Striker lists off the names on the ringside. Storm fights up with some shots to the face and a running neckbreaker for two as they’re both down.

Eye of the Storm and the Last Call are broken up but the second Eye of the Storm works just fine. Young is back with his own neckbreaker into a top rope elbow for two more. A superkick gives Young two and Storm is sent outside, meaning it’s time to start the big brawl. Young goes after Chris Harris, who knocks him silly with a left hand. Back in and the Last Call gives Storm the pin at 13:58. 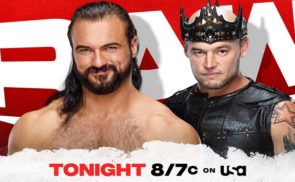 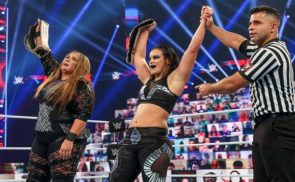