Their side of the story. Things have gotten a lot more interesting in WWE as of late and a lot of that has been due to the Twitch situation. Over the last several weeks, WWE has instituted a new policy which gives them control over their wrestlers’ Twitch streaming accounts as well as most of the money that comes with them. Someone has stood up to WWE over the situation and now they are gone, albeit with a reason.

Over the weekend, news broke that WWE had released Zelina Vega from her contract. This came after Vega had been one of the more vocal critics of the company’s new policy, as well as after a tweet saying that Vega supported unionizing. While it seems that the tweet was sent after Vega knew that she was going to be released, it would suggest another reason for the release, which WWE has now explained.

According to Sports Illustrated, Vega was officially released from WWE due to a breach of contract. While Vega had been vocal over the Twitch policy complaints, it was Vega’s OnlyFans account that sent things over the edge. The account, which cost $30 a month, offered risque (though not nude) photos of Vega, which put WWE in a difficult position. As a result, the company released her from her contract, which also acted as a warning to others who were considering something similar.

It was a risky move on both sides. Check out what WWE is giving up:

Opinion: I can see both sides of this and the OnlyFans account certainly does some like a more reasonable situation. That being said, this also feels like a situation where WWE is opening up a pretty big can of worms. I’m not sure how this is going to play out, but constantly telling wrestlers that they can’t do something while not giving them many benefits in return is a thin line to walk across.

What do you think of the move? What should WWE have done? Let us know in the comments below. 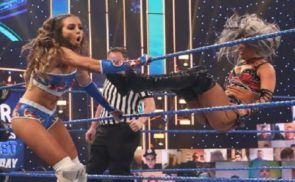 Original Plans For Chelsea Green’s SmackDown Debut Before Her Injury