What it won’t be. There are a lot of different ways to introduce a wrestler to a promotion. It could be anything between having them run in and appear as a surprise, announce them in advance, or something else. One of the most effective ways is to have vignettes air and then pay it off with a debut. That is the case for NXT at the moment, but now we know who it won’t be.

According to Fightful Select, the recent teases of the Diamond Mine in NXT has nothing to do with Tessa Blanchard. Despite Blanchard using a diamond motif in her gear. The vignettes have aired over the last two weeks and feature clips of people training in a gym. There is currently no word on who the Diamond Mine will be or where Blanchard, currently a free agent, will be signing.

Opinion: This is something that does have me curious, though I can’t say I’m surprised at it not being Blanchard. She is one of the most talented female wrestlers in the world today and it would be a little surprising to see her debut in NXT. I’m sure Blanchard is going to wind up somewhere in the near future, but she is going to have a few different options available to her.

Who do you expect the Diamond Mine to be? Who do you want it to be? Let us know in the comments below. 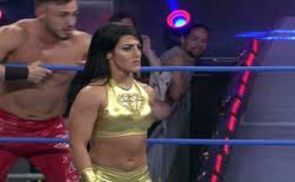