That could headline. There is something that makes mixed martial arts a nearly perfect path towards the wrestling world. Maybe it is the idea of two people getting into a ring/cage with each other and seeing two people fight until one wins. There are the occasional promos from the fighters and now a famous fighter wants to face one of the most famous names in all of wrestling.

While Vince McMahon is the most powerful figure in all of wrestling, he has been known to get in the ring every now and then. McMahon has wrestled several of the biggest names in wrestling history and is even a former WWE Champion. While he has not gotten in the ring in years now and probably never will again, he has been challenged by someone who has shown some interest in wrestling before.

Retired UFC fighter Conor McGregor’s company The Mac Life has posted an image to their Instagram account showing McGregor holding a UFC Title and a WWE Title. The caption asks if fans think he will ever appear in WWE. McGregor himself then sent out the image to his own Instagram story, with a caption of “McMahon vs. McGregor CEO Flashmatch”. WWE Champion Drew McIntyre responded, saying McGregor would have no change against McMahon and advised him to stick to his whiskey company. McGregor has suggested working with WWE before but nothing has ever come of it.

“All of the belts” ? ? Do you think we’ll ever see the McGregor billi strut in the WWE? ? . . #themaclife #official #conormcgregor #thenotoriousmma #irishmma #ufc #ufcnews #sbgireland #mmanews #mma #mixedmartialarts #fightgame #wwe

Big man @TheNotoriousMMA picking a fight with ANOTHER 70 year old, you couldn’t drop a guy in a pub, you have no chance against Vince. You’re just the latest guy thinking he can have his PR team stick my title on his shoulder & walk into our world. Stick to whiskey McTapper https://t.co/kwgt0EKdAa

McGregor has been a topic in WWE before. Check out some of the talk about him:

Opinion: McGregor in WWE is something I would believe when I actually saw it, though I’m not sure that would actually happen. Odds are this is him just having some fun and trying to get some attention and that’s all well and good. McIntyre responding is a smart move as well, as hearing from one of the top stars in WWE is something that fits in rather well with the whole thing.

Do you think McGregor will ever wrestle? Do you want him do? Let us know in the comments below. 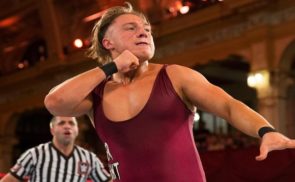 Here’s Why Shayna Baszler Has Been Missing