Sometimes you have to change things up. We are in the middle of a huge set of back to back weeks of wrestling shows with AEW running Fyter Fest and NXT countering with the Great American Bash. These are the kinds of shows that are going to keep audiences interested but now AEW is going to be fighting with their backs against the wall due to a problem they didn’t cause.

One of the biggest problems both in the world as a whole and the wrestling industry as well is the Coronavirus. People are doing what they can to protect themselves and as a result some of them are going to be more cautious than others. It can be even worse if you are exposed to the virus and that was the case for a top level wrestler. Now, the Fyter Fest card has needed an adjustment.

During this week’s edition of Dynamite, it was announced that the Fyter Fest main event had been postponed until the July 15 Dynamite, which will air as Fight For The Fallen. The match will see Brian Cage challenge Jon Moxley for the AEW World Title, but Moxley being exposed to the Coronavirus has forced the match to be postponed. There is no word on if Moxley has contracted the virus or if this is a precaution. This was the first mention of Fight For The Fallen airing this year.

It was a big announcement. Check out the big promo that went with it:

Opinion: This is the only thing that they could do as there aren’t really any other options to try in something like this. Moxley is an important part of the promotion but the match is something that can be delayed for another week. As soon as Moxley is in the clear, let him come back and do what he does so well. It’s annoying, but the right thing to do and the only choice.

What are you expecting from the match? What happens if Moxley cannot wrestle again? Let us know in the comments below.

WWE Forced To Postpone Plans To Bring Fans Back 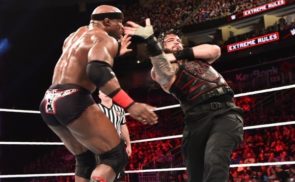