That’s a big role. Wrestling and acting have one of the more confusing relationships in the world. Wrestlers are seen as actors but they rarely get the chance to act outside of roles playing wrestlers, as that is all they are seen as being. That has not been as bad in recent years though, as some wrestlers are getting the chance to branch out. One is doing so in a major way.

Sasha Banks is one of the Four Horsewomen and has come a long way in her time on the main roster. After dominant the NXT Women’s Division, Banks moved up and has become a five time Raw Women’s Champion. It is easy to see why WWE would want to push her in a big way and she is going to get the chance in one of the bigger mainstream franchises in media history.

Banks is featured in the new trailer for the second season of the Mandalorian, a Star Wars series airing on Disney+. Banks can be seen as a hooded character whose name and plot details are unknown. It is not clear if this will cause any changes to her role on WWE television. The second season of the series will debut on October 30 and will be released weekly.

You can see her clearly. Check out the trailer with Banks included, plus some of her time in a more familiar environment:

Opinion: Good for Banks, as this is one of the biggest series around today. That is quite a nice coup for Banks and you know that WWE is going to make a big deal out of it, as they should. Star Wars is one of the most successful franchises of all time and is it a good thing to have WWE be attached to it in any way that they can. Banks is already a big star and this is quite the cool accomplishment for her.

What do you think of Banks? What will she do next in WWE? Let us know in the comments below. 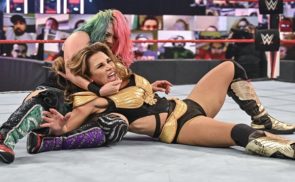