Let’s go outside. WWE has been trying to make some adjustments to get things back to normal during the Coronavirus pandemic but it has not been easy. There are only so many things that can be done to make the situation better and one of the biggest has involved the venue for the WWE television shows. After spending months in the Performance Center, it was time to move on to the Amway Center. But what happens after that?

One of the details of WWE’s deal with the Amway Center is that is it only going last until the end of October. While WWE will have a home for the next month and a half, they will have to figure out a place to go after that. Such a move would leave them open to a variety of questions, but there is a chance that they have something in mind to deal with the situation.

According to the WrestleVotes Twitter account, WWE is looking for outside venues to hold their television events once the Amway Center contract expires. The same venue would host both Monday Night Raw and SmackDown in the same week, with locations being sought throughout the south. It is not clear if fans would be allowed to attend, though some states have begun allowing fans to be present for events.

Over the past week or so, WWE assembled a small team to figure out if running TV from outdoors venues would be fesisble once the ThunderDome contract expires. Idea is both SD & RAW would be in same location each week. Southern states with good weather is the preference. All TBD.

WWE has gone outdoors before. Check out some of the times when wrestling went outside:

Opinion: It’s good that they are coming up with something like this and I’m hoping that WWE can find anything other than the Performance Center. You can’t get very far with such a small venue and it is nice to see WWE trying to do something about it in advance. I’m not sure where they are going to go, but there are a lot of places that would probably like to have them around, even for just a week or two.

How do you like this idea? Where will WWE go? Let us know in the comments below. 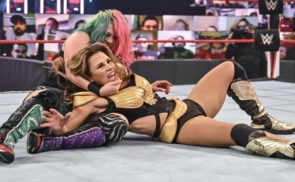