It’s the second week and that means we are in for something that might be more important than the debut episode. You can have as good of an opener as you want, but if you don’t get the fans to stick around, it isn’t going to matter all that much. The ratings and audience are going to be interesting after this week so let’s get to it.

Video on Private Party vs. the Young Bucks, the first match in the Tag Team Title tournament.

Private Party weigh 27 ounces of vodka cranberry and come from a place you need an invitation to. Isaiah Kassidy and Nick Jackson start things off with neither being able to hit a superkick. Nick spits his gum in Kassidy’s face so Kassidy flips out of an atomic drop attempt. Kassidy gets caught in a backbreaker/flipping neckbreaker combination to put the Bucks in control. A dive misses though and Kassidy hits a Lionsault to take him down.

Marc Quen comes in and starts busting out his own dives to a BIG reaction (as he deserves). A 450 gets a VERY close two on Matt but Nick is back in to start the Superkick Party. Nick sunset bombs Kassidy, with the powerbomb onto the ramp for a nasty landing. Back in and a powerbomb/Sliced Bread #2 combination gets two on Marc, setting up the Sharpshooter to work on the back even more.

With Kassidy down, it’s a top rope double stomp/backbreaker combination for two more on Quen. A spear gets two more on Quen as Kassidy gets pulled back off the apron. Quen gets over for the tag a few seconds later though and Kassidy comes in with a missile dropkick. He comes up holding his back but is fine enough to hit a double hurricanrana. Matt rolls the northern lights suplexes to bang up the back quite a bit before suplexing Quen at the same time for two.

The buckle bomb/kick to the head in the corner sets up another Sharpshooter, with Nick adding a facebuster. The tap seems near but Kassidy rapid fire crawls over for the tag. Quen makes a blind tag though and it’s the hurricanrana into the cutter (Gin and Juice) to rock Matt. The perfect shooting star press gets two on Nick. The Meltzer Driver is loaded up but Kassidy breaks up the springboard, allowing Quen to roll Matt up for the pin at 13:47.

Post match Private Party celebrates in the crowd all through the commercial.

Here are Chris Jericho and his whole group of friends for a chat. Jericho takes credit for all of Dynamite’s success last week and gets a thank you chant. That’s not what he wants though and he says that we are now. Yes they’re still together and yes they have a name. Jericho introduces the team, starting with the sexy Spanish god Sammy Guevara. Now Sammy is on his list. Then you have Santana and Ortiz, who are going to be nastier than ever before, which Jericho likes. Jericho: “Viva la raza.” Nice touch on Eddie’s birthday.

Then we have Jake Hager (which Jericho pronounces as Hagar) so we get a WE THE PEOPLE. Jericho: “We the people sucks and it’s dead and buried. It was a bad idea from bad creative and all that’s dead and gone.” Jericho brags about Hager’s undefeated MMA record and he’ll fight any boxer, fighter, wrestler, bare knuckle fighter or whatever. The team is dubbed the Inner Circle and they are taking over. Jericho goes on to Cody, who is part of a family Jericho never liked. Dusty was a jerk, he’ll beat up Dustin and he’ll beat the s*** out of Cody at Full Gear.

The winner gets a shot at Jericho for the title next week. During the entrance, Havoc says he likes the pain and the violence. Darby grabs a quick cradle for two and dropkicks Havoc into the corner. A bottom rope suplex doesn’t work as Havoc bites the fingers and Falcon Arrows Allin out to the floor in a big crash.

Havoc starts working on the fingers before choking in the corner to cut off a comeback attempt. A suplex puts Allin on the floor and we take a break. Back with Allin being Death Valley Driven into the corner and stomped in the head to keep him down. The Acid Rainmaker is broken up with a bite to Havoc’s fingers and it’s a knockdown into the Coffin Drop for the pin at 10:02.

Riho starts with Sakura and charges into a powerslam, only to pop back up with a dropkick. Her back is banged up and Sakura blocks a slam without much effort. A very screaming surfboard works on the back even more and it’s off to Priestly, who gets in a fight with Baker on the floor.

Riho is down in the corner so Sakura goes outside to help with a double suplex. A Riho dive takes them down though and we take a break. Back with Baker in truoble until Riho sneaks in for a double stomp to Sakura. Baker’s swinging neckbreaker gets two on Sakura and it’s off to the Rings of Saturn. Baker adds the Mandible Claw at the same time for the tap at 8:45.

We see a video of the Best Friends hugging.

The Best Friends are in the front row and asked about how they’re doing. They defer to Orange Cassidy, who gives them a thumbs up.

Tully Blanchard is with Spears and Pac is on commentary. Moxley gets right in his face and chops away before dropping Spears with a clothesline. Spears bails to the floor so Moxley knees him in the back and chokes away, with Tully’s interference not working whatsoever. As JR wonders how that isn’t a DQ, Moxley jumps off the apron with a forearm to the face but gets sent into the steps. The fight on the floor continues (they’ve been out there a long time now) with Spears Death Valley Drivering him into the barricade for a double knockdown.

Back from a break with Spears putting on a half crab but Moxley breaks it up in a hurry. Moxley sends him outside again for back to back suicide dives and scores with a running knee for two. The slugout it on but the Paradigm Shift is countered into the fireman’s carry backbreaker. Another fireman’s carry is countered into the Paradigm Shift to give Moxley the pin at 12:44.

Post match here’s Kenny Omega, carrying a barbed wire bat and a barbed wire broom. He throws Moxley the bat but Pac runs down with a chair shot to the back of Omega’s head. Moxley looks at Omega but drops the bat and walks away.

Hager is here with Jericho and Guevara. Dustin goes after Jericho on the floor to start and gets in a posting with a thud. We settle down to Page fall away slamming Sammy and handing it back to Dustin for a hard whip into the corner.

A belly to back toss sets up Page’s running shooting star press with Jericho having to make a save. Guevara gets in a knee though and fireman’s carry drops Page onto the top turnbuckle for two. Back from a break with Jericho posing until Page gets in a hard shot to the face. Sammy is right there to block a tag though and Jericho slaps Page in the face. The Lionsault hits knees though and Page scores with the big lariat, allowing the hot tag to Dustin.

Everything breaks down and Dustin dives onto Jericho and Sammy with Page adding a moonsault to the floor. Hager runs Page over though, leaving Dustin to hit a Code Red for two on Jericho. The powerslam takes Sammy down but the referee checks on him, allowing Hager to save Jericho from Shattered Dreams. Jericho hits the Judas Effect for the pin at 13:57.

Post match Hager goes after Page, who pelts a chair at Hager’s head. They fight to the back and the lights go out. It’s Cody laying out Sammy with Cross Rhodes but here are Santana and Ortiz to take Cody out. Maxwell Jacob Friedman runs out as well and teases turning on Cody, only to chair the Inner Circle down. Cue the Young Bucks for the real save and the fans are rather pleased. Jericho escapes but Allin skateboards down and beats Jericho up to end the show. 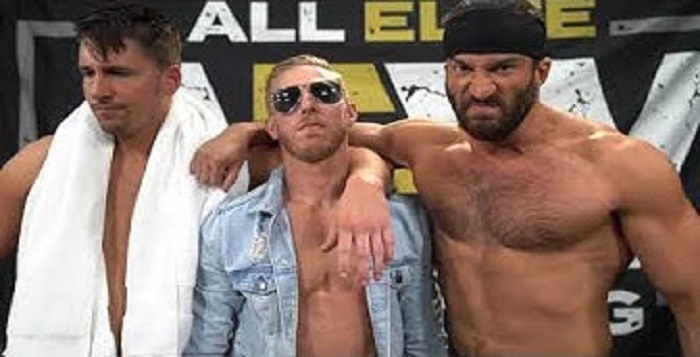 History Has Been Made! Title Change Takes Place On This Week’s NXT!