If you would like to see the full show, you can check it out for free right here: 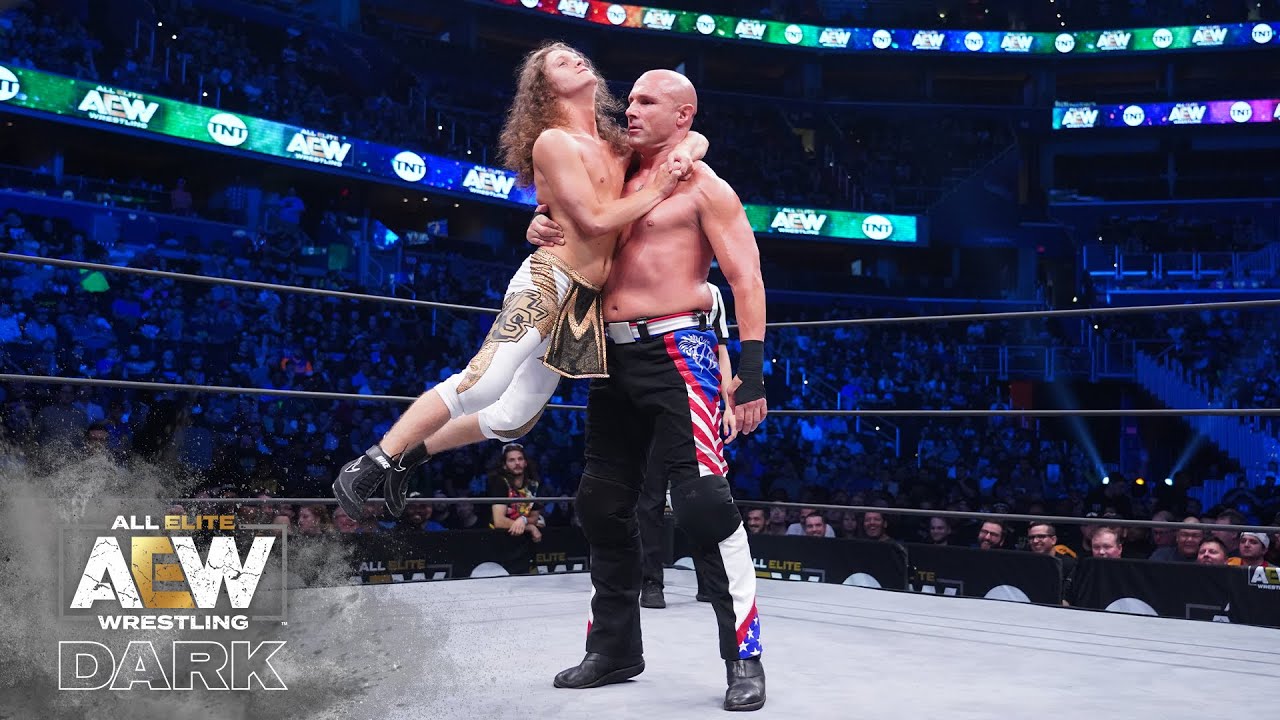 So this is something new (the second new show of the day) as AEW is releasing its dark matches (as “dark matches” enters a new definition) as a stand alone show on YouTube. Normally this is something that wouldn’t make a lot of sense but in this case, AEW needs to get their talent out there in front of an audience and that is what they’re doing here. There shouldn’t be any storylines here and it’s a pure wrestling show, which is nice for a change. Let’s get to it.

Tony Schiavone welcomes us to the show and explains the concept.

Darby takes a bit too long looking into the crowd and gets caught with some double knees in the corner. That’s fine with Darby, who is right back with a springboard armdrag to the floor, followed by three straight suicide dives. Back in and the Coffin Drop completely misses, allowing Darby to dropkick him into the corner. Something like a Brock Lock on the mat keeps Darby down but he’s fine enough to crotch Cima on top.

That means a Tree of Woe with headbutts to the knee for a pretty unique set of offense. More shots to the knee have Cima in trouble but he’s right back with a tornado DDT for two. Back up and Cima offers him a chance for some chops, demanding Darby’s best shots. Instead Darby hits him in the face and flips over his back into a Stunner for two.

The Coffin Drop onto the knee bangs them both up a bit more so Cima is right back with the Perfect Driver for two of his own. A top top rope Meteora to the back of Darby’s head gets two more, only to have him get the same off a Code Red. That’s enough to set up the Coffin Drop, which finally connects as it’s supposed to, for the pin at 6:57.

Hybrid Two is Angelico/Jack Evans. Orange Cassidy is here with Private Party and Best Friends to a ROAR. Hang on though as Evans needs to yell about how he and Angelico are the A half of their team but a bunch of superkicks break that up in a hurry. Fenix dives onto the Best Friends and Quen gets sent over the top onto Evans and Angelico. Evans is already ranting about having to make saves until we settle down to Isaiah punching Angelico in the face and screaming.

A cheap shot from Evans takes Isaiah down so the Lucha Bros come in and try some double teaming, only to have Isaiah score with some enziguris for a breather. Evans and Angelico come in to beat on Isaiah instead as tagging is more of a suggestion here. Isaiah is fine enough to hurricanrana Angelico into Evans in the corner, which allows the tag off to Taylor as extra audio is bleeding through commentary.

Barretta comes in to take Angelico down but Evans hits a springboard moonsault onto both Friends. That earns him the sliding German suplex from Barretta, which draws in the Lucha Bros to superkick both Friends down. Quen springboards onto both Bros and everyone winds up on the floor, with Cassidy putting his hands in his pockets. Angelico and Evans take him down and…that’s about it for now. Back in and Angelico and Evans beat up the Friends as JR is trying to figure out what the heck is going on.

Isaiah hits a heck of a flip dive to the floor but the Bros are back in to kick Quen in the head. With Fenix on the floor, Taylor finds his own sunglasses but stops to hug Barretta. That sets up the stereo suicide dives, leaving Cassidy to go up for the hands in pockets dive to the floor. Isn’t that a bit much energy for him? Back in and Fenix saves Pentagon from Strong Zero and a kick to the head sends Taylor into a Backstabber. Fenix hits a big corkscrew dive, leaving Pentagon to finish Taylor at 8:46.

Post match the winners argue over who gets to pose.

Quick look at the women’s division.

Priestly shoves Baker on the apron to start so Allie snaps off an armdrag. Hold on though as Priestly wants Baker, which is exactly what she gets. That sends Priestly over to Ford, as you probably expected. Baker gets two off her own armdrag but Ford sends her into the corner for a Great Muta handspring elbow. A northern lights suplex gives Ford two but she gets sent into the corner as well, this time allowing the tag to Allie.

The sliding forearm in the corner gives Allie two and it’s time to strike away at Ford. Priestly gets in a cheap shot on the floor though and the villains take over. A stomp onto Allie’s arm keeps her down but Ford misses a second handspring elbow. Baker comes back in to trade forearms with Priestly, followed by the fisherman’s neckbreaker for two. Priestly’s belly to back suplex gets two but Baker kicks her down and hands it back to Allie for a rollup. Everything breaks down and Priestly kicks Baker in the head.

Allie Death Valley Drives Priestly for two before heading to the floor, leaving Allie to DDT Ford for two more with Priestly diving back inside for the save. They head outside again though, leaving Baker to Paige Turn Ford into the Rings of Saturn. With that still on, Baker grabs something like a Mandible Claw at the same time for the tap at 11:11.

We look at Chris Jericho and company taking over at the end of Dynamite.

Here’s a look at the Tag Team Title tournament with Twitter users picking their winners.

Preview for this week’s Dynamite.

Jurassic Express now has a rather awesome entrance, complete with steps making a glass of water shake. Daniels has a mic on a stand with him so he can shout SCU. Daniels and Stunt start things off and Stunt can’t do much outside of spinning around into a small package. A stomp onto the back sets up the Floss Dance, with Daniels countering with his own. Jungle Boy and Kazarian come in to trade near falls off some rollups and cradles until Kazarian knocks him down for the springboard spinning legdrop.

It’s off to Sky to get in a boot to the head but Boy gets over to Luchasaurus and you can feel the fans getting more into things. That’s a bit too good though and it’s back to Stunt, who gets flipped onto Daniels into a splash for two. Boy comes back in for a chinlock but Daniels is right back up with a tilt-a-whirl side slam for two of his own. Stunt’s crossbody bounces off of Sky so Luchasaurus comes back in. Some strikes have no effect for Sky but a DDT puts Luchasaurus down….and he nips right back up.

Stunt and Boy dive onto Daniels and Sky, leaving Kazarian to get chokeslammed and moonsaulted for another near fall. A headscissors faceplant of all things sets up Stunt’s running shooting star press as everything stays broken down. Luchasaurus gets sent outside though and it’s Celebrity Rehab on Boy and a powerbomb/Backstabber combination finishes Stunt at 9:17.

Tony wraps us up in a hurry. 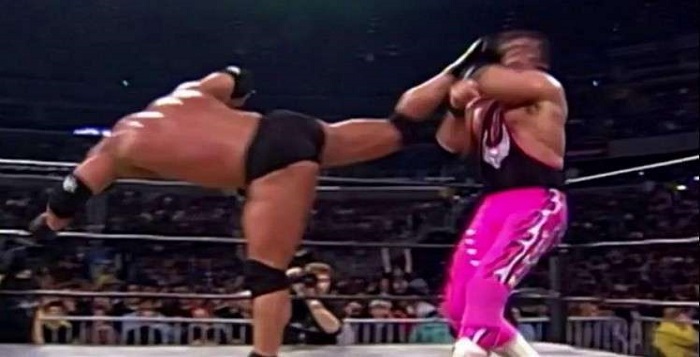 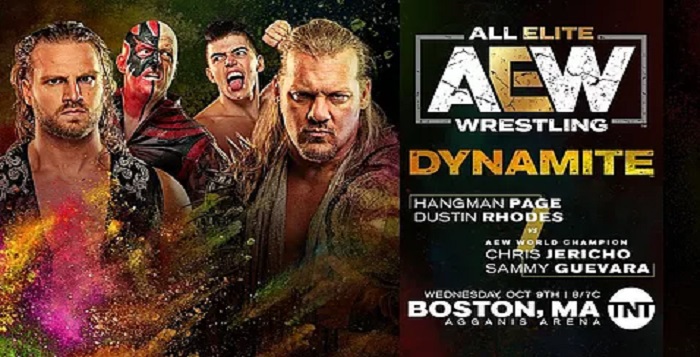