We’re on another special schedule this week and this time around it’s another stacked show. We have a tag team gauntlet match for the #1 contendership to the Tag Team Titles for All Out, plus all of the other tag matches that this show really likes presenting. Throw in a Matt Hardy vs. Sammy Guevara tables match (though a chairs match would make more sense) and we should be good to go. Let’s get to it.

There are fans back too and it already helps a lot.

The winners get the title shot against Kenny Omega/Hangman Page at All Out. The Young Bucks and the Natural Nightmares start things off with Nick hiptossing Marshall early on. Dustin comes in to trade armdrags with Matt and Dustin needs a little breather. The powerslams plant the Bucks and a double Russian legsweep gets two on Matt. It’s back to Dustin who teases the Goldust deep breath but just works on the arm instead.

Matt gets away from Dustin though and the Bucks get in a double dropkick to send Marshall outside. Dustin is right back with a Canadian Destroyer to Matt though and it’s back to Marshall. The QT Special is broken up and a double superkick drops Marshall. The BTE Trigger finishers Marshall at 6:23.

It’s the Best Friends in third and they shoulder Nick down to start. Trent is sent to the floor but he avoids the moonsault and hits a spear on Nick. Back in and Nick is sent hard into the corner as Jericho rants about how much he hates Being The Elite. A superkick and a German suplex on the apron allow Nick to get over for the hot tag though and house is cleaned. Something like Diamond Dust sets up the rolling northern lights suplexes but Trent grabs the tornado DDT out of the corner to put both of them down.

It’s back to Nick for more kicks until Chuck spinebusters him down, although he is favoring his knee a bit. Soul Food into the half and half suplex takes Nick down again and there’s the Big Hug. Strong Zero is reversed into a rollup for two on Trent and he’s pulled down to the floor for a Swanton from the apron. Back in and the hanging 450 gets two on Trent. The Meltzer Driver is reversed into a rollup on Matt and here’s Hangman Page to hold Nick back to give Chuck the pin at 16:31.

FTR is in last and has Tully Blanchard in their corner. Back from a break with Chuck in trouble but countering a Figure Four attempt with a quick small package. Wheeler breaks up the hot tag attempt and even pulls Trent to the floor for a suplex to break it up again. That lets Harwood grab a reverse Figure Four…and Chuck taps at 26:20. It’s so sudden that commentary acknowledges that they almost missed it.

Darby Allin, in a Ricky Starks mask, walks across a really high bridge and says he isn’t afraid of Starks. Then he dives off the bridge.

Archer has Jake Roberts with him and runs Maluta over at the bell. Another shot puts him on the floor but Archer lets him come back in for a slugout. That just annoys Archer, who throws him into the corner with a suplex. The chokeslam gets two with Archer pulling him up, much to Jake’s delight. The Blackout into the EBD Claw finishes Maluta at 2:55.

Post break Jake says there will be twenty one men in the Casino Battle Royal and Archer better win it. Archer thinks he can throw out all twenty men, which makes Jake happy because he loves to abuse people. Cue Team Taz (Jake: “IT’S THE FLINTSTONES!”) with Taz saying that one of the members is winning the battle royal. Jake says they should put on some chicken suits because they’re going to get plucked. Violence is teased but here’s Darby Allin, on the skateboard, to go after Starks. The two of them fight to the back so Archer and Cage are ready to go.

Video on Thunder Rosa, including clips from the NWA and comments from Billy Corgan.

We get a quick signing between Thunder Rosa and Hikaru Shida.

It’s time for the contract signing between Jon Moxley and MJF. Jericho rants about Moxley being #1 in the PWI 500 and Tony makes it worse by saying Jericho is #3. Jericho: “WHO IS NUMBER TWO??? MARKO STUNT???” The contract involves banning the Paradigm Shift from their match and MJF signs in a hurry but Moxley hesitates. MJF talks about how contract signings end in violence ten times out of ten but they need to practice social distancing. MJF: “Kind of like your hairline Jon.”

Moxley laughs it off and says MJF will get there one day. MJF says Moxley is as sharp as a marble and that’s not surprising. He knows Moxley is crazy because even Mike Tyson said he wouldn’t want to be in a dark alley with Moxley. On September 5, they’re going to be in a ring though and MJF is a wrestling prodigy. He is going to pick Moxley apart and use every piece of the ring to take him apart like a brain surgeon.

Moxley is going to try to take him outside for the brawling because that’s all he knows. He grew up watching and idolizing people like Sandman, New Jack and Onita. MJF grew up watching Buddy Rogers, Ernie Ladd and Tully Blanchard and they made him a wrestling machine. When they leave the ring on September 5, he’s wearing platinum because he’s the best in the world.

If Moxley is so sure that he’s a better wrestler though, why does he need the Paradigm Shift? If Moxley isn’t so sure, maybe MJF should call Moxley’s hot little wife and tell him he’s single. Moxley is ready to fight so the lawyer threatens a lawsuit. Sure he wants to use the Paradigm Shift and drop MJF on his head to cause him permanent neck damage. But he doesn’t want to get sued because the only lawyer he knows is his old public defender and he’s in jail. None of this matters anyway because on September 5, MJF is a dead man.

Moxley signs and MJF celebrates, though Moxley says he loved what is on page 17. MJF: “THERE ARE ONLY SIXTEEN PAGES!” Moxley slipped in a deal, saying that he gets to face the lawyer next week and the Paradigm Shift is legal. If the lawyer doesn’t show up, MJF doesn’t get a title shot. Moxley: “I should be a lawyer.”

Santana and Ortiz recap their issues with the Best Friends and sure they’ll apologize. They’re just sorry that Trent’s mom wasn’t in the van when they wrecked it.

Eddie laughs off the idea that he and his friends are a faction. They’re just about titles and nothing more. It’s a brawl to start with the Bros hitting big flip dives out to the floor to take down all four of them. Back in and a running dropkick into a gutwrench suplex drops Garrison as JR and Jericho talk about guitars. Kiss comes in and Matrixes away from Blade’s right hand. It’s off to Janela to forearm Blade in the corner.

Back from a break with Janela punching Fenix down but getting sent to the ramp by Butcher. That earns Butcher a Stunner over the ropes and Janela runs over for the tag off to Kiss. House is cleaned but Janela gets caught on the apron with a package piledriver. Pillman comes in and gets to chop away but walks into the spike Fear Factor for the pin at 9:02.

Post match Kingston says the five of them are in the Casino Battle Royal and guarantees a winner.

Here’s the Dark Order, minus Lee, carrying a casket (Jericho: ‘IS CODY IN THERE???”). Evil Uno talks about the team purchasing six lawn mowers for this kind of a celebration. This is a farewell to the man known as Cody and they open the casket, with Ten inside. He even has a Nightmare Family jacket and a fake Cody tattoo. They throw the jacket inside and put the Cody flag onto the casket. Now it’s Brodie coming out and Uno demands that all of them show respect.

The team gets in the ring for an interview with Tony, with Lee saying the Dark Order was laughed at about a year ago because of people like Tony. See, Lee was sitting in prison back then and now they’re here with the gold in his hands. Lee tells the team to shut up for chanting for him and introduces Ann Jay as the Queen Slayer. Cody is never getting the title back and the Open Challenge is over.

One of the members tries to cheer for him so Lee punches him in the face. Cue the Natural Nightmares to go after the Order but the numbers take him down. Scorpio Sky comes in to clear out everyone but Lee, only to have Anna come in from behind for a slap. That lets Lee get in a cheap shot so here’s Matt Cardona to chase everyone else off.

The Young Bucks find Hangman Page at the bar and yell at him for costing them the match. They know he doesn’t want to be part of this because he’s a drunk. He’s also out of the Elite.

Baker is still in her wheelchair but has an offer for Swole: if Swole wins, she can have any match with Baker that she wants. It’s a brawl before the bell and Swole can’t fight off the numbers game. Swole catches Reba on the top though and a super hurricanrana barely works. Kip Sabian distracts the referee so Swole gives him Dirty Dancing. Ford throws Swole back in so Reba can hit a middle rope moonsault for two. Reba tries to bring in the crutch but the referee stops it. The crutch is picked up anyway but Swole ducks and Ford is knocked out to give Swole the pin at 2:48.

Here’s the Dark Order again with a JOIN US folder for Taya Conti. A big hug seems to say yes. JR: “Let’s all go tot he mall.”

Tables match. Matt wastes no time in sending it outside for a whip over the barricade. The beating stays on near the crowd but Sammy gets in a knee to the face as we take a fast break. Back again with Matt hitting a Side Effect on the apron and loading a bloody Sammy onto the table. The apron elbow misses though and the table is destroyed.

Sammy grabs a chair but Matt gives him a Twist of Fate through it instead. It’s time for a table with DELETED painted on top (Jericho: “OH NO!”) and Matt even knows how to get it untangled from the ropes. Matt puts it on top of an open chair and goes up but his balance gives out. That lets Sammy superplex Matt through the table for the win at 6:28.

Result: Sammy Guevara b. Matt Hardy – Superplex through a table (6:38)

Post match Orange Cassidy sprints across the stage to jump Jericho and the big fight is on with Sammy trying to help Jericho to end the show. 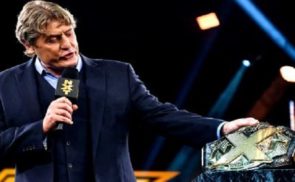