That’s a fast one. You never know when you might see someone get injured in the ring and that can change everything at once. Some of these can be a lot worse than others and that can have some major consequences. An injury can change a lot of things at once in a major domino effect and unfortunately that is the case at the moment, with a lot of things changing in a hurry.

Kross and Scarlett opened this week’s NXT with Kross’ arm in a sling. He announced that he would not be able to defend the title due to his injured shoulder, meaning that the title is officially vacant. Kross said that this means nothing and he will be back. There is no word on what this means for the title as NXT has yet to make an official announcement on the title’s future.

He was a monster. Check out Kross’ title shot before the injury:

Opinion: Well dang man. This is a horrible thing to see as you never want to see an injury, especially one that is going to shake things up like this. Kross looked to be the next big thing in NXT but it opens up a lot of doors for a lot of people. I’m curious to see where they go now, as Lee is gone and Kross didn’t have a chance to set up a first challenger. This could be interesting, but it’s much more sad than anything else.

What do you think of Kross? Who will be the next champion? Let us know in the comments below. 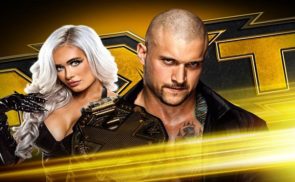