If you would like to see this show in full, you can watch it right here:

I’m not sure what to expect from this show as it might be the last show without fans, but at the same time it is a thirteen match card that lasts an hour and fifty eight minutes. Yes I mention the time and the amount of matches every week, but given how this show goes, what else am I supposed to talk about on a show made of squash matches? Let’s get to it.

Orange Cassidy is here too. Chuck headlocks Thomas to start and drops him with a sunset flip. It’s off to Jackson, who is chopped in the corner by Trent. A Meteora drops Jackson again and a hanging northern lights suplex makes it worse. Chuck comes back in but gets kicked in the back so Jackson can take him into the corner. A knee out of the corner allows Chuck to get over for the tag to Trent and a tornado DDT drops Jackson. The spear on the floor keeps Jackson in trouble and it’s time for the Big Hug. Back to back piledrivers give Chuck the pin on Jackson at 5:57.

Tully Blanchard is here with Spears. A headlock takes Sorensen down to start but Jessy fights up with a drive into the corner. There’s a dropkick to put Spears on the floor, meaning it’s time for a meeting with Blanchard. Back in and they trade chops in the corner until Spears hits a dropkick in the back of the head. Spears drops him hard onto the apron but a piledriver is blocked and Sorensen grabs a cutter. The tornado DDT is blocked though and Spears hits the Death Valley Driver for the pin at 5:37.

The bigger Mel backs her into the corner but Velvet ducks and slugs away with forearms. Some kicks to the leg stagger Mel but a side slam takes her down in a hurry. Velvet gets in a kick to the head and goes up, where she dives straight into a choke spinebuster to give Mel the pin at 2:35.

Jake Roberts is here with Archer, who brings out a rather large man and kicks him in the face before the bell. D3 gets kicked in the face at the bell and there are some hard whips into the corner. Archer tells him to throw some punches and then punches D3 much harder. One heck of a chokeslam gets two so Archer rips at his face. D3’s forearm out of the corner doesn’t do much good as the Black Out into the EBD Claw is good for the pin at 2:46.

Leva Bates is here with the Initiative. The villains (the non-librarians in this case) take Avalon into the corner to start to work on his arm but it’s quickly off to Cutler. The pace picks up with Cutler taking Serpentico down so Avalon can get two. They keep up the fast tags as Cutler comes back in, only to have Luther slam Serpentico onto him a few times for some near falls.

As Taz talks about Luther having breath that smells like a dead possum, Avalon comes in off the hot tag and gets to clean house for what must have been a good fifteen seconds before Serpentico suplexes him down. Leva isn’t happy but the distraction means that Avalon’s quick rollup only gets two on Luther. Everything breaks down and Cutler’s elbow sets up Avalon’s top rope splash for two. Leva slips Avalon the book but he hits Cutler by mistake. Luther powerbombs Avalon onto the barricade and it’s a Doomsday Meteora to finish Cutler at 8:47.

Vickie Guerrero is here with Rose. King slugs away to start but gets grabbed by the throat for a toss to the floor. A forearm to the face lets Rose bend her around the post but King pulls Rose face first into the post. Back in and Rose’s spinebuster gets two and King’s something close to a Samoan drop is good for the same. Vickie shoves King off the top though and the Beast Bomb finishes at 4:01.

Black and Austin start things off with the Gunn being taken down with a headlock. That’s broken up for some shots to Black’s face and Billy comes in for a double Russian legsweep into a legdrop. Stone comes in to block Austin’s armdrag and get two off a tilt-a-whirl slam. A suplex gets the same and a belly to back version gets the third two in a row. Austin kicks him away and makes the hot tag to Billy to clean house but Black is ready for the Fameasser. Everything breaks down and Austin’s hiptoss neckbreaker (the Quick Draw) finishes Black at 6:10.

Kip Sabian is here too. They armdrag each other down a bit until Monroe walks the corner to take her down. Sabian busts out a pair of leaf blowers for a distraction though and it’s time to choke on the ropes. That lets Ford get in a quick kiss and the fisherman’s suplex is countered as a result. A second attempt is countered into a small package for two on Ford and Monroe grabs a Backstabber for two. Ford sends her hard into the corner for the handspring elbow and more elbows to the face have Monroe in trouble. Now the fisherman’s suplex can finish Monroe at 4:40.

Santana and Ortiz vs. Metro Brothers

The Brothers have been on NXT before and they’re greasers. The Brothers are named (Chris and JC), though we aren’t told which is which so it doesn’t mean much. Ortiz headlocks and knees let’s say JC to start but gets headlocked down for the escape. The slugout annoys Ortiz and it’s a powerslam to take JC down.

Santana comes in for a standing senton into a backsplash. Three Amigos connect as Taz makes sure that Tony is still here. Ortiz’s DDT plants JC and he allows the tag off to Chris, who is suplexed down in a hurry. A middle rope hurricanrana is countered into a powerbomb and there’s a Liger Bomb for a bonus. Santana kicks Chris in the face and Ortiz gets the pin at 5:35.

Post match the Best Friends run in to beat down Santana and Ortiz. They brawl out of the arena and into the parking lot with Chuck being suplexed onto a trashcan to get rid of him.

This could be good and Taz is rather excited. A shoulder drops Starks to start and Dean grabs a headlock. Back up and Dean misses a shoulder from the apron and gets kneed in the face. The standing Coffin Drop gives Starks one but a slap to the face just annoys Dean. The slugout goes to Dean and he hits a running knee in the corner. A running boot misses though and Starks hits Roshambo for the pin at 4:07.

Hager lets him grab a headlock and Stunt goes for it, earning himself a big toss to the ropes. Stunt avoids a shot and dances before ducking a big boot. Hager drives him into the corner and hits a heck of a toss before driving a knee into Stunt’s chest. Now the big boot connects and the Rock Bottom into the head and arm choke finishes Stunt at 3:35.

Post match Hager goes after him again but the rest of the Jurassic Express makes the save.

Penelope Ford is here again. Sabian takes him down by the arm and gets to pose a bit. That’s broken up so we hit the chain wrestling with Kazarian winding up on top with a headlock. Kazarian’s hammerlock is broken up as commentary talks about how obvious it is that Ford is going to interfere later on. A knee down onto the arm has Sabian in more trouble so he comes up with a poke to the eye.

We hit the headlock on Kazarian as Tony thinks Taz is extra aggressive because of how much he has been yelled at on commentary before. A trip from Ford causes Kazarian to be sent outside and it’s a series of stomps in the corner back inside. Sabian rolls him into a reverse Koji Clutch but Kazarian makes it over to the ropes. As Taz and Veda agree about hanging onto the ropes for 4.9, Kazarian fights up and gets two off a rollup.

They fight to the apron for a slugout until Kazarian head back inside. Sabian is pulled into a slingshot cutter for two with Ford pulling his feet onto the ropes like a good manager should. Kip gets in a knee to the face and a discus punch but something like a fisherman’s suplex doesn’t work. Instead Kazarian grabs a reverse DDT for the pin at 9:39.

Kiss headscissors Evans down to start and Janela comes in with an ax handle to the arm. A knee to the ribs and a forearm to the back of Janela’s head cuts him off though as we hit the preview for Dynamite instead of talking about the match. Angelico comes in and gets forearmed in the corner as Janela screams a lot.

Janela’s clothesline gives Sonny two but Angelico pulls him face first into the middle buckle. It’s back to Evans for a quick suplex and the stomping is on in the corner. Angelico grabs the inverted Figure Four and Janela’s attempted save lets Evans stomp away. A lot of ranting from Angelico almost allows the tag to Janela but Evans makes the save and chokes a bit.

Kiss flips away from Evans and makes the hot tag to Janela for a suplex. Janela makes Angelico DDT Evans (erg) and a blind tag brings Kiss back in. A front flip double stomp hits Evans on the apron and Janela adds a Death Valley Driver. Sonny moonsaults onto Angelico on the floor but a 450 only gets two. Angelico gets in a cheap shot on Kiss though and it’s the flipping backslide to give Evans the pin at 8:47.

The Dynamite preview wraps us up. 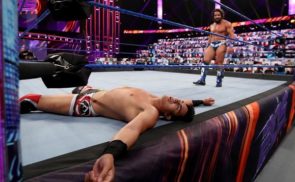