That’s a big one. Titles are an easy concept to understand in wrestling and they always have been. Someone wants to be the best around and they win a title to do so. That being said, sometimes things need to change a little bit if something happens outside of pure necessity. That was the case with the NXT Title this week but there is a big time solution already on hand.

Later in the show, NXT General Manager William Regal announced that a four way match would take place the following week, with Finn Balor, Johnny Gargano, Tommaso Ciampa and Adam Cole competing for the vacant title. The match will be a sixty minute Iron Man match with the wrestler with the most falls becoming the new champion. The winner will be the third ever two time NXT Champion, joining Shinsuke Nakamura and Samoa Joe.

We could be in for something special. Check out the four participants in action:

Opinion: What else can they really do? I know it isn’t the most intricate or detailed story, but NXT does a nice job of throwing a bunch of their best wrestlers out there and having someone come out as champion. The match is a little gimmicky, but at the same time it is something that makes sense and something that makes a lot of sense in the situation. This wasn’t something they had time to plan so I’ll take what I can get.

What do you think of the plan? Who leaves as champion? Let us know in the comments below. 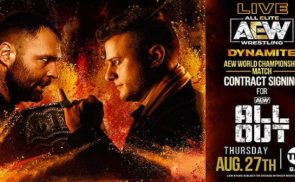