Here are Scarlett and Karrion Kross, with his arm in a sling, to open things up. Kross told us that he would become NXT Champion and that on the way there, everyone would suffer. That’s what he did at Takeover but when you go to war, you expect casualties. Hence his separated shoulder, which is going to prevent him from defending the NXT Title. There are obstacles on the path, but to him, the obstacles are the path. Kross lays the title down and Scarlett puts the hourglass next to it. Kross says this changes nothing because everyone pays the toll. Tick tock.

Breezango is challenging and jump the champs during the entrances. We get the opening bell with Breezango cleaning house until Barthel armbars Breeze down. That earns him a dropkick though and we take an early break. Back with Fandango fighting out of a chinlock but getting double teamed back down. That doesn’t last long as Fandango gets over for the hot tag to Breeze as the pace picks up.

A jumping knee rocks Barthel but Breeze has to avoid running into the referee. The delay lets Barthel hit a suplex, only to dive into the Beauty Shot for two. Aichner makes the save and comes in to pound away as he is known to do. Breeze knees him down though and Fandango tags himself in for the guillotine legdrop to Aichner. Barthel pulls him to the floor though, meaning Fandango hits a dive. That earns him a hard suplex on the floor though and we take a break.

Back with Fandango still in trouble as Aichner hits the middle rope moonsault for two. Breeze makes the save but gets uppercutted out to the floor as Barrett mentions wrestling with Breeze all the way back in FCW. Aichner and Barthel’s double team hits each other though and Breeze superkicks them both. Fandango comes in with the double Last Dance for the pin and the titles at 15:17.

The new champs dance on the announcers’ desk.

Damian Priest says the after party is still going. Cue Timothy Thatcher who seems to want a title shot.

Ciampa jumps him at the bell and unloads on him in the corner. Willow’s Bell finishes at 52 seconds.

Post match Ciampa destroys Atlas even more, including sending him knees first into the steps a few times. Ciampa even catapults him throat first into the bottom of the ring, meaning we need a stretcher job as the fans chant for Ciampa anyway. Ciampa pulls Atlas off the stretcher with another Willow’s Bell on the floor.

Candice LeRae talks about her friendship with Tegan Nox over the years, including going to a castle in Wales. Now Nox doesn’t get her anymore though, as Nox wasn’t there when Candice needed her. LeRae is going down the right path now and LeRae can do things the Gargano Way too. If she doesn’t want to though, just stay out of LeRae’s way.

Bronson Reed thinks he should get the first NXT Title shot since he has beaten Damien Priest. Cue the returning Austin Theory to say Reed is taking some steps in the right direction and maybe he can have a title shot by the time he’s about fifty five. Reed slaps the taste out of his mouth.

Hang on though as here are Robert Stone and Aliyah to say not so fast. Mercedes isn’t getting in the ring after that powerbomb from Rhea Ripley last week…and here’s Shotzi Blackheart to run Stone over with the tank again. We have a replacement.

Shotzi takes her down to start and hits Welcome To The Ball Pit but Yim is right back with a running hurricanrana. Mia rolls her up for two and they both catch kicks to the ribs. They set them down so Yim gets in a cheap shot and hammers away in the corner. A dragon screw legwhip out of the corner has Shotzi in more trouble with the knee banged up. Yim grabs a bow and arrow but Blackheart is back up with a discus forearm. That earns her a quick suplex as Yim throws her down again. Yim goes up but gets pulled down, setting up a backsplash to the back. A top rope backsplash finishes Yim at 4:31.

William Regal has a decision on the NXT Title.

Dakota Kai and Raquel Gonzalez say they’re a team but Kai promises to become NXT Women’s Champion. As for tonight, Gonzalez is ready to settle things with Rhea Ripley.

Here’s Regal to announce a solution to the NXT Title. It is a shame that Kross had to vacate the title and Regal wishes him the best on his long recovery. As for the title though, there will be a four way match next week (on Tuesday) to crown a new champion. The four of them can all claim to be the best ever in NXT and they could all claim to be the face of NXT. Those four are Johnny Gargano, Tommaso Ciampa, Finn Balor and Adam Cole. Oh and for a bonus: it’s a four way, sixty minute Iron Man match.

Barrett is so excited that he will be back next week to call the match. title shot.

Escobar is defending and is on his own this week. Scott wastes no time in hurricanranaing him out to the floor and we take an early break. Back with Escobar working a headlock but getting reversed into something like a Gory Stretch. That’s broken up so Scott goes for the short armscissors which sends Escobar to the floor. Escobar catches him with a toss from the apron into the Plexiglas though and Scott is in trouble.

A drop onto the steps gives Escobar two back inside and the pace slows down a bit. Scott manages to grab a knuckle lock and they both go to the middle rope. That means an attempt at a jumping hurricanrana from Scott but Escobar reverses into a super sitout powerbomb for another near fall as we take another break. Back with Escobar hammering away against the ropes but Scott reverses and unloads in the corner. A backbreaker sends Escobar outside again and the Fosbury Flop takes him down.

Back in and the rolling Downward Spiral gives Scott two more but here is the rest of Legado for the distraction. A jumping superkick gives Escobar two so here is Breezango to take out Legado. Scott’s jumping knee to the face gets two and a bridging German suplex is good for the same. The House Call gives Scott another two and a flipping slam out of the corner gets yet another near fall. Escobar bails to the floor and puts on a mask, which seems to be loaded. A headbutt knocks Scott silly to retain the title at 16:45.

Johnny Gargano is ready to go after the title and remind everyone who he is. He has been the Iron Man for years and next Tuesday, he’ll have the title to prove it.

Finn Balor says he’ll rise to the occasion. Next week the four cornerstones are ready to fight but he’ll prove that he is the centerpiece.

Fallout from the Undisputed Era interrupting Maverick’s match and Bobby Fish/Roderick Strong are here too. Maverick unloads on him to start and dropkicks the knee to send O’Reilly outside. The big flip dive from the top takes out the rest of the Era but O’Reilly is back with the strikes inside. Maverick’s comeback is cut off with a whip into the corner and the striking continues. A quick Underdog attempt is countered though and O’Reilly rolls into an Achilles Lock. Maverick hammers away but can’t get out, forcing the tap at 3:27.

Post match the beatdown is on but O’Reilly tries to call off the troops. Cue Killian Dain (who Maverick was facing when the Era interfered two weeks ago) for the save. Maverick pulls himself up but Dain beats him up as well.

We look back at the Women’s Title match at Takeover.

Adam Cole is glad to be done with Pat McAfee and is ready to get his title back. He is the Iron Man and that is undisputed.

Ripley throws Kai aside to start and gets the big lockup with Gonzalez. A headbutt rocks Gonzalez so she shoves Ripley into the corner, where Shirai tags herself in. The middle rope hurricanrana sends Gonzalez outside and we take a break. Back with Ripley swinging away at Kai but getting pulled to the floor by Gonzalez. That means a ram into various things and they head back inside to keep up the beating.

Kai grabs a rollup for two and slaps on a seated abdominal stretch. Gonzalez comes back in but gets kicked in the head by Rhea, allowing the hot tag to Shirai. Everything breaks down and Shirai hits the running knees in the corner to Gonzalez, followed by a 619 to Kai. A scorpion kick gets Kai out of trouble but Shirai blocks the Kairopractor. Shirai’s German suplex gets two but Gonzalez takes her back into the corner.

Shirai tries to dive over for the hot tag but the referee doesn’t see it, meaning she is taken back over to keep up the beating. Cue Mercedes Martinez to pull Ripley off the apron and Gonzalez plants Kai with a spinning powerslam for two. Ripley is back up to take the tag but she trips on her way in and gets kicked in the face. Gonzalez’s powerbomb finishes Ripley at 10:03. 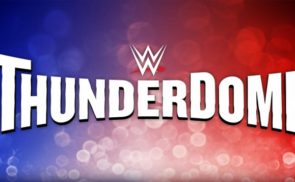