Brock Lesnar defeated Cain Velasquez at WWE Crown Jewel in Riyadh, Saudi Arabia on Thursday, October 31. The match was for Lesnar’s WWE Championship and lasted only a matter of minutes until Cain tapped out to the Kimura Lock.

The early tap-out gave WWE critics all the ammunition they needed to hate on the match, but it actually went much better than many believed it would. Netter man looked bad and the ending left the door open for both men to meet again at some point. But if it’s over, the question is what’s next for Cain Velasquez?

This was perhaps not the train wreck that fans anticipated. Velasquez approached the bout like an MMA fighter and that’s how he carried himself. Lesnar was his usual animalistic self and waited for the right opportunity to pounce. Neither man acted out of character and it never felt as though Brock was waiting on Cain. Velasquez was quick on his feet and he did not look uncomfortable in the ring.

Cain obviously prepared for the match ahead of time of course and it definitely showed. The weakest parts of the match were the moments when Lesnar and Velasquez were tied up on the ropes. These moments were frustrating, because the audience was anxious for something big to happen. But when outsiders step into the ring and move faster than they should, things typically do not end well. 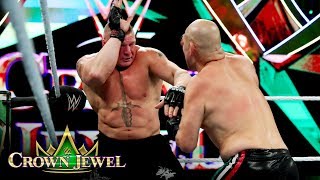 But was that truly the case for Cain Velasquez? Crown Jewel was not the first match for the former UFC champion. Velasquez has wrestled in Mexico, where he worked a Lucha Libre style. The nearly 240-pounder was getting off the mat like a cruiserweight and hitting moves that a rookie pro wrestler shouldn’t be able to hit. Cain Velasquez showed great promise and it was obvious that he was working hard to get his legs under him.

However this was not the same man who stepped into the ring with Brock Lesnar on October 31. That Cain Velasquez was a heavyweight who was not leaving his feet and that became very apparent very early on. Velasquez was on the mat and didn’t dare do anything that previously caused the crowds in Mexico to pop. But why?

Was Cain Velasquez instructed to work a heavyweight style in his match with Lesnar? There have been whispers in the past that Lesnar is difficult to work with. So if that is indeed the case, what are the chances that he didn’t want Velasquez to utilize a Lucha Libre move-set? Or did that even play a factor in Cain’s WWE style?

The fact is that Cain Velasquez is capable of much more than he did in his match against Lesnar. WWE knew this bout at Crown Jewel would gain mainstream media attention, which means every major sports news outlet in the country would be covering it. Is it possible that WWE wanted to keep Cain grounded, so he did appear to be a man out of his element? After all, it would be difficult to convince a mainstream audience that the match was possibly legit, with Cain suddenly hitting Hurricanranas.

But did Cain’s subdued presentation hurt his match with Lesnar? Fans were waiting for something big to happen and when it didn’t, the overall reaction was likely not what WWE wanted. Cain Velasquez was supposed to get over as the credible MMA star, a guy that was a true threat to Brock Lesnar’s WWE Championship. That was the role he was given and he played it well.

However in the end, it perhaps wasn’t enough to make anyone really care about him. Of course the 2.05 minute runtime for the match didn’t help anything either. Once again, The Beast Incarnate came into a world title defense and once again he was dominant with very little resistance from the challenger. But this time around, that challenger was a former UFC champion.

Was this match a message from Vince McMahon to Dana White? Was this WWE’s way of telling the world that their talents stand head and shoulders above MMA’s best fighters? Or was it simply a one-off between WWE’s biggest draw and the freshly minted WWE Superstar with his whole pro wrestling career ahead of him?

So what will become of that career? Cain Velasquez reportedly signed a multi-year deal with WWE, which means he’s likely not going anywhere anytime soon. But what does he do after coming in on the very top against the WWE champion? Despite what he does next, will it be a letdown for him and for the fans who support him? WWE appears to have gone for the quick headlines with Velasquez versus Lesnar, which is understandable. But now Cain is 0-1 and needs someone else to fight.

Braun Strowman would perhaps be the most logical choice to step up and face Cain Velasquez. But Strowman went down to boxing heavyweight champion Tyson Fury at the same Crown Jewel event. So will WWE go that route, or move Cain on to someone else? Roman Reigns was the top guy in WWE until Seth Rollins assumed the mantle. The Big Dog could surely give Velasquez a solid match and make headlines of his own in the process.

But Roman is just now to the point that he’s finally getting over as a babyface. WWE obviously wants Velasquez in that role as well, so would this matchup make any sense in the long run? Facing Bobby Lashley would surely be a sensible booking move, especially with Lashley’s own history in the world of MMA. This would be yet another bout that WWE could market to the masses. Of course WWE could always take Cain in another direction with someone like Aleister Black, or Andrade, as both men employ a style that would mesh extremely well with the former UFC champ.

The fact is that Cain Velasquez can do much more than what he did with Brock Lesnar. Velasquez is a 37-year old rookie with a body that has endured 13 years of professional fighting. He’s not the youngest and he won’t be the fastest, but he has already shown that he has the willingness to learn and the desire to get better. He came in on top, but now he will hopefully get the chance to earn that spot. WWE has a worldwide star in Cain Velasquez and with any luck, he will excel in his newfound profession.