Kenny Omega might be the greatest wrestler in the world today. His match with fellow New Japan star, Kazuchika Okada, was the first pro wrestling contest to earn a six-star rating from longtime fight journalist, Dave Meltzer.

Many New Japan fans feel that it’s just a matter of time before Omega wins the top prize in NJPW. That’s especially true with Kenny as the leader of Bullet Club, a faction with huge international appeal, as New Japan attempts to expand their reach globally.

That’s what we thought, anyway. It turns out that Omega has other plans.

He posted this statement to Twitter a few days after his historic Wrestle Kingdom main event.

The obvious next step–you would think–is a jump into the world of WWE. Many New Japan stars have made that leap, including Shinsuke Nakamura and former Bullet Club leaders Prince Devitt (aka Finn Balor) and AJ Styles, all of whom have found tremendous success in Vince McMahon’s company.

But Omega has been more vocal than most in his disdain for WWE. It was not very long ago that he expressed his disappointment over WWE’s apparent pro wrestling monopoly. Shortly before his Wrestle Kingdom match, he said he’d “rather be the legend that never stepped foot in WWE.”

Pro wrestling, of course, is a business where you never say never. But Omega just redefined the quality of in-ring storytelling in the main event of wrestling’s biggest international stage. It’s tough to imagine anything bigger for him to accomplish–unless it’s inside WWE.

Do you think WWE could convince Omega to sign up? If not, where should he go from here? Let us know in the comments, or over on Facebook! 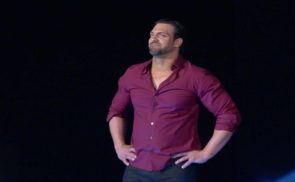