That will work. Ever since it was announced that The Undertaker would be the headliner in the WWE Hall of Fame, Class of 2022, many have been wondering who will be the person that inducts him. That question was answered on today’s episode of the Pat McAfee Show.

Vince McMahon was a guest on today’s show and announced that he will be the one that officially inducts The Undertaker into the WWE Hall of Fame. You can see the announcement vai Twitter below:

"I'm gonna have the distinction of inducting The Undertaker into the Hall of Fame" ~@VinceMcMahon#PMSLive pic.twitter.com/qbC6XBEGjb

This monumental decision was destined, considering the close personal relationship Mr. McMahon and The Phenom have developed over the years.

The WWE Hall of Fame Ceremony will take place Friday, April 1, at American Airlines Center in Dallas as part of WrestleMania Week. The event will stream live exclusively on Peacock in the U.S. and WWE Network everywhere else. In addition, for the first time in history, WWE will present both Friday Night SmackDown and the 2022 WWE Hall of Fame Ceremony live on the same night at American Airlines Center, giving all fans in attendance an unprecedented opportunity to witness both events for one price.

I love every bit of this. If you’ve seen the Last Ride documentary on Peacock, you know how special the relationship between The Undertaker and Vince McMahon is. This is going to be a very special and emotional night for everyone in the arena and I can’t wait to see it and witness history that night!

WRESTLING RUMORS: What AEW Plans To Do With Ring Of Honor 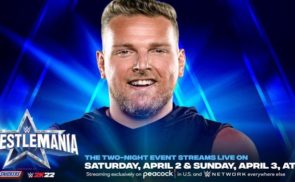 Pat McAfee To Wrestle At WrestleMania 38