That could have been worse. Injuries are one of the worst things that can happen to a wrestler as their careers can be knocked off course in the blink of an eye. Some of them are built up over time while others happen all at once. What makes matters worse is you might not know how long someone is going to be out or just how bad it is. That was the case again this week but now we know a bit more about what happened.

Amari Miller was defeated by Lash Legend during this week’s NXT. Following the match, Miller was stretchered out of the arena during a commercial break in a moment that was not mentioned on the broadcast. Miller has since sent out a tweet, announcing that she suffered a concussion during the match. There is no word on when the injury took place or how long she will be out of action.

Opinion: As bad as a concussion is, this could have been worse and thankfully it is nothing more serious. What matters now is getting Miller back in the ring, which could take some time as concussions can be the kind of injury that lasts for a long time. Hopefully she is back in the ring a lot sooner than later, as Miller is starting to come up the NXT ranks a bit and is improving almost every week.

What do you think of Miller? What should she do when she gets back? Let us know in the comments below. 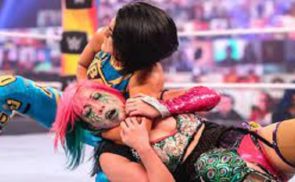