I’d call that a win. WWE has been the undisputed king of professional wrestling for a very long time now and that is still the case for the most part. However, for the first time in decades, WWE has some serious competition in the form of All Elite Wrestling. The company has made an instant impact on the wrestling world and it turns out that they are a big deal outside the United States as well.

Over the last year, AEW has been fairly regularly defeating NXT in the Wednesday Night Wars television ratings and audience. NXT has picked up a few wins here and there but for the most part, it has been the AEW Dynamite show. This has been quite the selling point for AEW so far, and it seems that they have another point to brag about, even if it is from around the world.

AEW Vice President Cody has sent out a tweet detailing AEW’s success on television in the United Kingdom. The tweet includes the following information:

• AEW Dynamite is beating the first-run broadcast of all of its competitors in the UK for audience volume.

• It is also almost double the audience of Impact Wrestling, which has been airing in the same slot as Dynamite and also on a free-to-air channel.

• Dynamite benefits from reaching considerably more people than any of its competitors.

• Full episodes of Dynamite on ITV4 have reached 2.8m people, based on 5+ consecutive minutes of viewing.

• In its first year, AEW programming on ITV channels reached 6.7 million people, based on them having at least 5 consecutive minutes of viewing.

Cody also mentioned that AEW is interested in coming to present a show in the United Kingdom, though there is no word on when they will be able to do so. AEW Dynamite celebrates its one year anniversary last week, having debuted on October 2, 2019.

This is some really positive/staggering data & research about our friends across the pond!@ITV / @AEW ????

(we can’t wait to take the team over and wrestle there) pic.twitter.com/t7mnrVk7XX

The show has been a big deal for a good while now. Check out what they have been doing lately:

Opinion: That is a very strong accomplishment, though I would be curious to know some more details. AEW defeating WWE is impressive, but how fair of a battle is it? What kind of a network does WWE air on? What time does it air? Either way, that is the kind of thing that AEW should certainly be bragging about as it means quite a bit to defeat WWE in anything, let alone something this big.

What does this mean for AEW? Will it translate to the same success in America? Let us know in the comments below. 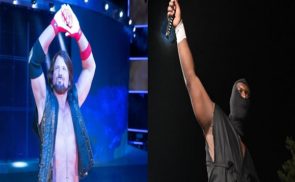 WWE May Be Giving AJ Styles A Very Big Upgrade