WWE May Be Giving AJ Styles A Very Big Upgrade

What might be. WWE is undergoing a lot of changes at the moment and a lot of that has to do with the WWE Draft. Several of the wrestlers on both the Monday Night Raw and SmackDown rosters were shifted around, opening up several new doors for storylines and character development. That could involve someone who is new to the main roster and needing his big break.

One of the more important changes in the Draft was AJ Styles being moved back to Monday night Raw. After spending the last year on SmackDown, it was time for Styles to see what he could do elsewhere. Styles is the kind of person who can work well with anyone and that could be the case with a lot of people on Monday Night Raw, including someone you might not have expected.

According to Fightful Select, WWE had considered making Jordan Omogbehin into a bodyguard for Styles. Omogbehin has been serving as the security for Raw underground and had a brief staredown with Braun Strowman on Monday Night Raw. He also portrayed the giant ninja who worked for Akira Tozawa. There is no word on if the story will still be used or how far along it has moved. Earlier this week, it was announced that Raw Underground was finished.

You might have noticed him. Check out Omogbehin and Styles before their potential pairing:

Opinion: This could work out fine as Styles is the kind of heel who could do rather well with a monster bodyguard. I have no idea what Omogbehin can do in the ring but he is the kind of guy who can just sit there and look intimidating. Let him be there as a monster and do whatever he wants because you don’t have to do much when you are that big. Maybe it doesn’t happen, but it could be intriguing if that is where they go.

What do you think of the idea? Will it happen? Let us know in the comments below. 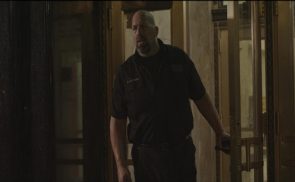