Add it to the list. WWE presents quite a bit of television content in any given week, with at least two hours of programming three nights a week. That allows them to offer quite a bit of material, but that is not all they do. In addition there are also regular or in some cases semi-regular specials. Now WWE might be considering adding another one for a show that doesn’t have that many.

According to the WrestleVotes Twitter account, WWE is considering presenting another NXT Stand & Deliver special later this year. The show would be paired with one of the main roster’s stadium shows, which include Money in the Bank in July, Summerslam in July or Clash At The Castle in September. WWE’s preference is to hold it over Money in the Bank weekend, but Summerslam seems more likely. NXT’s most recent Stand & Deliver took place over WrestleMania 38 weekend in April.

WWE has discussed adding another Stand & Deliver event for one of the 3 big stadium shows happening this summer. I’ve heard the preference is UK for Clash at the Castle, but Nashville/SummerSlam seems more likely. All TBD still.

Opinion: This is a good idea as NXT needs to get their wrestlers out in front of fans who aren’t in the Capitol Wrestling Center. April’s Stand & Deliver was an entertaining show as they had the chance to set things up and if that is the case again, another edition could work well too. I’m somewhat interested in this idea, and if they set it up properly, everything should work out.

What do you think of the idea? When should the show take place? Let us know in the comments below. 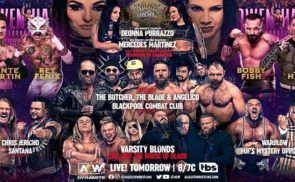