They’re a big deal right now. There are almost no stories in the world at the moment unrelated to the Coronavirus. The spread of the disease has changed almost everything about the day to day way of life and that is likely to be the case for a long time to come. With so many changes, there are very few things to praise, but the most powerful man in wrestling is doing just that.

Right now, there are no people more praised than front line healthcare workers. The people who go out and do these jobs every day are helping to contain and treat those who have caught the virus and they deserve this kind of attention. Athletes are certainly involved in such praise, with various WWE wrestlers getting in on a special tribute to these front line workers.

The Real Heroes Project has put out a video thanking a specific healthcare professional by sending them gear and uniforms with the professional’s name on the back, along with a message of thanks. The video includes WWE names John Cena, Triple H and Charlotte. Both Vince McMahon and the official WWE Twitter accounts have retweeted the video, which was released on Wednesday.

It’s a pretty awesome message. Check out the video, including the WWE names:

Opinion: This is something that brings a smile to my face and it’s cool to see people who are often treated as heroes taking part in the video. The people they are honoring deserve the credit that they are receiving right now because they are risking their own health to protect others. That isn’t something a lot of people would be willing to do and it is quite amazing to see.

Thomas Hall has been a wrestling fan for over thirty years and has seen over 50,000 wrestling matches. He has also been a wrestling reviewer since 2009 with over 5,000 full shows covered. You can find his work at kbwrestlingreviews.com, or check out his- Amazon author page with 30 wrestling books. Get the latest and greatest in professional wrestling news by signing up for our daily email newsletter. Just look below for “GET EXCLUSIVE UPDATES” to sign up. Thank you for reading!
What is next for Charlotte? Will Cena or Triple H ever win another World Title? Let us know in the comments below. 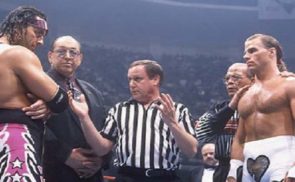