That might get some people talking. There are very few wrestlers who are as divisive as the Bella Twins. Opinions on them range from high praise to complete dismissal as the team was certainly successful, but often not in the conventional way. Despite all of that, there is no denying that the two of them were successful, and with that success comes a way to give their thoughts on various wrestling situations, including a major debut.

The Bella Twins may have left wrestling but they are still involved in it to an extent, mainly through their Total Bellas series. The series is still tied to WWE and therefore, fans may still be interested in hearing the Bellas’ takes on things. This is the case with older moments as well, including one that directly impacted their time with WWE. As luck would have it, they have a new way of doing just that.

Eonline.com has released excerpts from the Bella Twins’ new book Incomparable, including a statement about the 2017 Royal Rumble, which featured Ronda Rousey’s debut at the end of the show. The night was supposed to be the Bella Twins’ final night in the promotion and Nikki Bella was not thrilled with the result. She called the debut a slap in the face of all of the women involved and said that it didn’t need to happen that way.

“It was nothing against Ronda—it is thrilling that she is at WWE—but it was a bit of a slap in the face to all the historic women wrestlers who had come out for the match, the main event, only to have the moment upstaged by the Ronda announcement. It just didn’t need to happen like that.”

It was a big moment. Check out Rousey’s debut and her match against Nikki at Evolution:

Opinion: I’m not sure on this one. A lot of the women who made appearances in the Royal Rumble weren’t exactly the biggest stars ever. Rousey literally debuted that night and was main eventing WrestleMania the next year. She is one of the biggest stars in the history of women’s wrestling or women’s athletics whatsoever, so saying she was upstaging people is a bit of a stretch. Rousey was the star that night and showed you that things were changing in a big way. I’m not sure I’d call that a slap in the face, but rather a major step forward for wrestling in general.

What did you think of the debut? Was it a slap in the face? Let us know in the comments below. 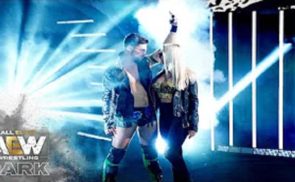