Clarification needed. There are a lot of stories out there about Vince McMahon and a lot of them, while hard to believe, are true. One of them is his obsession with having certain words banned for one reason or another. This can cause some headaches for everyone involved as not only can it make WWE sound strange, but it can also confuse some fans. That was the case again recently.

According to Wrestling Observer Radio, the term “non-title” is no longer allowed to be used on WWE television. Why the change has been made is not clear, but now WWE is not allowing the term to be used. This caused confusion as the Street Profits vs. Viking Raiders match was never described as being non-title, which made everyone involved believe it was for the titles.

It was a big match. Check out what we wound up getting:

Opinion: This is the kind of thing that just makes WWE seem confusing. All you had to say is the titles weren’t on the line and there was no confusion, but for some reason they took this route instead. Instead, you get fans not being sure what is going on and being disappointed because the titles weren’t on the line. Just figure out something that makes sense, or let them use the term that has been used for decades.

What do you think of this? Is WWE being ridiculous? Let us know in the comments below. 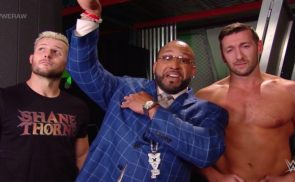