I’d call it newsworthy. We are officially in WrestleMania week and that means the eyes of the sporting world glance over at wrestling for a change. That can include some appearances on mainstream sports television, which can cause some interesting questions given how off the wall this year’s WrestleMania is going to be. That was the case on Sunday night.

This year’s WrestleMania is not exactly going to look like the usual show. In addition to all of the issues that have been covered extensively so far, there is the problem of a lot of wrestlers not being willing to/able to work the show. This includes one of the bigger names in all of the company, though as of Monday morning WWE has not made any official announcement about his status. They came close in a weekend interview though.

WWE COO Triple H was a guest on Sunday night’s SportsCenter and spoke about WrestleMania. One of the questions asked was about the status of Roman Reigns, who has been reported as not working the show due to his weakened immune system. Triple H would not directly answer the question, but did say that wrestlers who were uncomfortable working the show did not have to, though he said you would have to watch the show to see what was taking place. WWE is still advertising Reigns for the match as of Monday morning, though WrestleMania has already been taped in advance.

There is a lot in this one. Check out Triple H speaking on all things WrestleMania:

Opinion: I’m not sure what WWE is waiting on, but assuming Reigns is really out of the show, they might want to hype up whatever they have next. It isn’t like they don’t know what is going on at a show that took place last week, but false advertising on top of everything else is not a good idea. The interview was interesting, if nothing else due to see Triple H trying to dance his way around the question.

What would you do regarding Reigns’ status? What is your favorite Triple H WrestleMania moment? Let us know in the comments below. 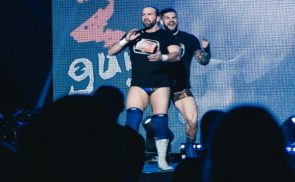 Breaking: Roman Reigns Confirms That He Is Out of WrestleMania 36