It’s the final night in Las Vegas before we head over towards Atlanta for what is now the last set of TV tapings available. We’re on the way towards Rebellion and that likely means a lot more “show is canceled” graphics. It’s not like they have much of a better choice so it’s as good as they can do here. Let’s get to it.

The opening recap looks at Sami Callihan being revealed as the Realityislost hacker and attacking Ken Shamrock, who had just been announced as the newest Hall of Fame inductee.

Willie Mack vs. Chris Bey vs. Acey Romero vs. Daga vs. Rohit Raju vs. Jake Crist vs. Cousin Jake vs. Trey

One fall to a finish and the winner is the #1 contender to the X-Division Title. It’s a brawl to start and soon it’s Romero running over Bey and Crist on his own. A backsplash crushes Bey but a double missile dropkick puts Romero on the floor. That leaves Trey and Bey to trade missed dropkicks and it’s a quick standoff. Bey knocks Trey to the floor but gets crushed by Raju’s running splash in the corner.

Jake takes Bey’s place and hits a running shoulder to Raju in the corner as the one on one sequence continues. Mack slams Crist and the standing moonsault connects. Mack’s running flip dive takes out Jake and Crist, meaning it’s Daga and Trey going back inside. Bey joins them and gets powerbombed by Daga with Raju making the save. Daga and Raju miss each other a lot so Romero replaces Raju. That means Daga tries to slam him for some reason of general stupidity, leaving Romero to go up top.

The Tower of Doom sends Romero crashing down and Daga’s top rope splash gets two. We go into the parade of strikes to the face until Trey ties up Crist’s legs and suplexes Bey at the same time. Raju makes the save but can’t tornado DDT Jake. Mack’s fireman’s carry spinebuster plants Jake instead but Daga grabs Mack in a northern lights suplex. The dives are on in a hurry but Crist breaks up Romero’s attempt. That just earns him a Pounce, setting up Romero’s big dive to take out everyone else. Back in and Jake spinebusters Crist, only to have Mack hit the Six Star Frog Splash for the pin at 10:44.

Dave Crist tries to fire up Mad Man Fulton. Jake runs in to say it’s time to get back on a winning streak. Sami Callihan is testing them you see, but Dave says no one has spoken to them in months. They won’t do the thumbs up, thumbs down because they’re waiting for Sami.

Post match Moose beats him up a bit more, including some chair shots to the ribs. Moose loads up a Pillmanization of the face but Scott D’Amore comes in to say if Moose wants TNA he can turn around. Cue Suicide to take Moose out.

Rosemary is still at the bar and rants about spending two years extracting revenge from the dark side. Someone off camera says “Two years? That’s it?” and it’s….Raven. He doesn’t think much of two years of hatred. Take him for example: it’s been twenty years and sometimes he isn’t sure if he hates Tommy Dreamer or loves him. Raven describes it as “orgasmic” because it goes on forever. He can’t wait to be in the same nursing home as Dreamer so he can cut the bag on Dreamer’s IV.

Ace Austin and Reno Scum come up to Willie Mack in the back. Willie isn’t buying into the mind games because he’s taking the title. Johnny Swinger comes in to say that’s it for the Mack and Pack Connection, but the miz-arks really want to see the two of them fight for the X-Division Title. That’ll get him some rats.

Dez and Wentz of course. A quick spinebuster plants Dez and it’s a catapult into a Death Valley Driver for a very early two. Dez gets sent into the corner before he can even take his hoodie off and there’s the Pit Stop to make it worse. A kick to the face allows the double tag to Wentz and Luster as the pace picks up. Everything breaks down and it’s Wentz being sent outside, leaving Dez to take a top rope Curb Stomp for the pin at 4:36.

Joey Ryan gives something close to a PSA about keeping Katie Forbes safe from the Deaners.

The Deaners aren’t sure what it means to be canceled, or what toxic masculinity means.

Sami Callihan is in a small room and asks why he did what he did. Impact has made him wrestle Shamrock one on one on pay per view and that’s not cool. Shamrock was the World’s Most Dangerous Man but now that’s him, because he sees everything.

Old School Rules and Super Genie is here with Sabu and Rhino. Dave and Sabu start things off with a clothesline sending Dave to the corner. It’s off to Fulton vs. Rhino as they’re tagging under Old School Rules. Everything breaks down in a hurry and they all wind up on the floor, with the fight heading to the ramp. A chair is dropped though and Fulton sends Rhino into the corner back inside.

Rhino fights back on Dave without too much trouble and hands it back to Sabu. That means a slam from Fulton and Crist yells at the referee over a near fall. Sabu is back up with a cutter and the hot tag brings in Rhino to clean house. Genie throws in a chair so Sabu can hit Fulton, setting up a dive to the floor. Dave hits Rhino low and grabs the chair, but stops to swing at the referee. That means a Gore from Rhino to pin Dave at 8:14.

Su Yung uses the coffin to go to the Undead Realm to face Havok. She finds some people tied up, James Mitchell, and Havok herself. Mitchell says Yung has to go so Havok grabs a crowbar. Yung has a sword and the fight is on with Yung choking with the noose. One of the chained up men breaks free and hits Yung with a pipe and various other things to keep her down….until she cuts his throat with the sword.

Havok saves Mitchell from the save fate but gets caught with the Mandible Claw. Mitchell stops them and says Yung has proven that she should have been with him the whole time. The minions come in to grab them both though and Mitchell sends them to the Wastelands, which look like a desert.

John E. Bravo is here with Elgin and Valkyrie. Eddie and Elgin start but Tessa wants to come in instead. That means it’s off to Tessa instead, with a quick leg trip taking Taya down. A spear drops Tessa as well, but she’s right back up to face Elgin. Some shots to Elgin’s knee slow him down and it’s off to Eddie, who has to slip out of a suplex attempt.

A Bravo distraction lets Taya pull Tessa off the apron and Elgin’s pop up powerslam gets two on Eddie. Back from a break with Eddie still in trouble but turning it into a slugout with Elgin. The Blue Thunder Bomb gets Eddie a breather and the hot tag brings in Tessa to clean house. Both men save their partners from getting slammed down but Tessa hurricanranas her way out of a superbomb. Eddie comes back in for the rapid fire chops to Elgin, followed by the overhead belly to belly to put him on the floor.

Bravo gets knocked off the apron and there are the double dives to take out the villains. A Codebreaker out of the corner into a tiger driver gets two on Elgin with Taya making the save. Eddie kicks Taya to the floor but Magnum is countered into a powerbomb onto Eddie’s back. Tessa is back up with a reverse hurricanrana and tornado DDT to Elgin but Elgin blasts Tessa down. The Elgin Bomb doesn’t work on Eddie, who strikes Elgin down instead. Taya’s distraction sets up the buckle bomb into the Elgin Bomb for the pin at Taya cuts Tessa off at 18:04.

We go back to the Wastelands….and Rosemary just happens to be there. She doesn’t care what Mitchell did to them and the alliance is formed. They wind up back in Mitchell’s lair, with Rosemary putting on sunglasses and going off on her own. Mitchell tells Havok and Yung that it was just a test and they can be a unit. Mitchell stabs him in the stomach with a dagger and Mitchell dies, only to wake up in Heaven with….a cat and Abyss? Mitchell: “Who booked this s***?” 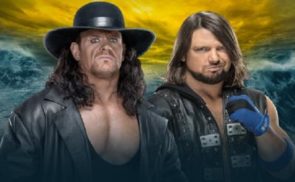