Back, but with a twist. With so many wrestlers on its roster, WWE has to come up with some different ways to keep things interesting. That can be easier said than done, but sometimes the best way is to have someone flip from good to evil or vice versa. It is an idea that has worked for years and now it seems to have been done again by someone who has not been around that long.

Xia Li made her return to WWE TV this week on SmackDown and seemed to turn heel in the process. Li had debuted on the show and billed herself as the Protector, but this week she said that she did not see anyone worthy of her protection so she would be protecting herself. This comes after Li has been absent from SmackDown for several weeks, with her only televised match on the main roster taking place on February 25.

She made it pretty clear. Check out what Li said: 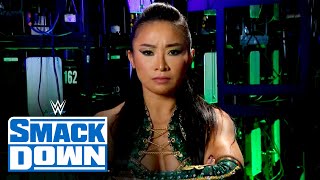 Opinion: This feels like another example of WWE bringing someone onto a new show and having no idea what to do with her. Li was brought to the main roster in the 2021 Draft, wasn’t used until December, wrestled one match in February, and is already needing a change. That is about as fast paced of a change as you can get and makes me wonder how much planning WWE put into her in the first place. Either way, it doesn’t make WWE look great and hopefully it doesn’t wreck Li’s career.

What do you think of Li? How can she be best used in WWE? Let us know in the comments below.