It’s another title week this time around as Ashton Smith and Oliver Carter are getting a rematch against Moustache Mountain. This is a 2/3 falls match though and that should make for a pretty awesome showdown between two great teams, even though Moustache Mountain is teasing a move to the dark side. Let’s get to it.

The opening video looks at the Tag Team Title match.

Back Alley Brawl, meaning street fight and Gradwell starts the fight in the aisle before the bell. The beating is on with Gradwell grabbing a trashcan but getting it knocked away. Williams manages to knock him down but we have a masked man looking at Williams from somewhere near the entrance. They go inside with Williams pounding away but Gradwell grabs some backbreakers.

The fight heads back outside where Gradwell gets in some more trashcan shots, only to get sent into the post. A lame fire extinguisher blast gets Williams out of trouble and he puts Gradwell on the steps for some stomps onto a chair onto Gradwell. Back up and Gradwell slams him onto a trashcan, meaning a table can be loaded up.

As is almost always the case, that takes far too long and Williams chairs him down to take it back inside. Williams gets sent hard into the corner but he comes back with a shot to the leg. The belt is removed to whip Gradwell in the back but that isn’t going to work for him as he whips Williams instead. Gradwell is sent to the apron, where he catches Williams on top for an AA off the apron and through the table. Back in and Williams is done at 9:43.

Post match the masked man chases Williams to the back.

Video on Symbiosis vs. Mark Andrews/Wild Boar, with Eddie Dennis issuing the challenge for the tag match.

Turner backs her into the corner but gets shoved away as McKenzie isn’t having that. Some forearms stagger Turner but she’s right back with a bicycle kick to take over. Another running kick gets two and the chinlock keeps McKenzie down. That’s broken up without much trouble and, after ducking another kick, McKenzie hits the spear for the pin at 4:43.

Isla Dawn is ready to put out Meiko Satomura’s flame and win the Women’s Title.

Some American NXT stars are coming, including Von Wagner, who Saxton Huxley refers to as STUPID MAN.

Xia Brookside is ready to batter someone next week.

Moustache Mountain is defending and this is 2/3 falls. Bate starts with Smith, who can’t shake off the early wristlock. Smith’s reversal is reversed so Bate can hit some running shoulders and armdrag him into an armbar. Seven comes in but his assisted moonsault is countered into a rollup for two so Smith can take over. It’s off to Carter to work on an armbar of his own, which doesn’t last long as Seven is back with a legdrop.

Smith saves Carter from a double suplex though and the champs are sent outside. Back in and Bate snaps off a dropkick for two on Smith and it’s Seven coming back in for a kick between the shoulders. The seated full nelson goes on but Smith ducks a clothesline and dives over to bring Carter back in. A release German suplex gets two on Bate, who grabs a victory roll for the same. Seven’s assisted powerbomb gets two on Carter as everything breaks down. Back to back kicks and clotheslines drop the champs and an assisted moonsault gives Smith the pin on Seven for the first fall at 9:57.

There is no break between falls so Carter kicks Seven in the face for two. Private Party’s Silly String into a splash connects for two more as Seven stays in trouble. Seven finally gets in a shot to the face out of the corner but a missed enziguri means no tag. Carter’s kick to the head gives Smith two but Seven grabs a DDT.

That’s enough for the tag off to Bate and the pace picks way up. Smith saves Carter from a middle rope elbow to the face so Bate suplexes Carter for two instead. It’s back to Seven and stereo Tyler Driver 97s get two on Smith and Carter. With that not working, Bate hits the running clothesline into Seven’s dragon suplex for the pin on Smith at 16:28 to tie it up.

Bate punches Smith back into the corner but Seven gets Blue Thunder Bombed for two. Another assisted moonsault is broken up with Bate pulling Seven out, only to have Carter moonsault onto the two of them outside instead. Back in and Bate has to springboard in with a knee for the save and they’re down again.

Seven and Smith strike it out until the Seven Star Lariat drops Smith for a close two. The top rope knee into the Birminghammer gets two more with Carter making the save for a false finish. Bate is sent into Seven so Smith can grab a rollup for a VERY near fall so Seven sends Carter into Smith. Seven is evil enough to put his feet on the ropes though and that’s enough to retain the titles 2-1 at 21:39 (Bate is NOT pleased).

Bate (begrudgingly) celebrates with Seven to end the show. 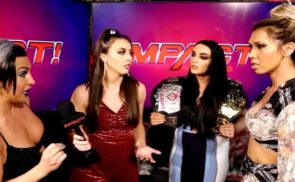 Out For A Bit: Another Star Announces Upcoming Surgery 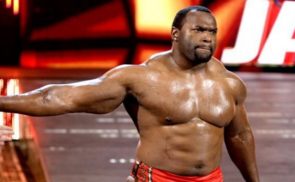