So this is the last episode of the Sinclair show and that means it is hard to say when the show is going to be back. That is quite the shame as I had been looking forward to this show for the last few weeks recently as opening the vault has offered a lot of gems. Maybe we can do that one more time. Let’s get to it.

Strong is defending. They shove each other around to start and Strong shoulders him down. Edwards sends him into the corner for some chops and a fireman’s carry faceplant has Strong down. A running boot to the face in the corner rocks Strong again and we’re clipped to Strong kicking him in the face and sending him outside.

Clipped again to Eddie hitting a middle rope double stomp to the apron, followed by another inside. A powerbomb sets up a half crab but Eddie has to let it go to take out Truth Martini. The Sick Kick gives Strong two and we’re clipped to another backbreaker giving Strong another two. The Stronghold goes on again but Eddie reverses into the half crab. That’s reversed as well and Strong kicks him in the face, only to get pulled into a cradle for the pin and the title at 25:36.

They shake hands to start and we’re ready to go. The House of Truth tries some early interference and get thrown out to make this one on one. Well two on one as Truth Martini is still at ringside. Lethal drops to the floor twice in a row to start but the fans declare it awesome anyway. A lockup doesn’t go anywhere so they trade wristlocks with both guys challenging, only to have Briscoe take over with a front facelock.

We hit the chinlock for a bit before Briscoe fights back up and grabs a neckbreaker. Back from another break with the Lethal Combination getting a quick two. The Macho elbow is broken up for a bit, only to have Lethal shove Briscoe off to stop a superplex. Now the elbow gets two but a Koji Clutch is quickly broken up.

They head to the apron with Lethal hitting him low to save himself from a Jay Driller through the table. Well I’d hope he broke it up as it would have meant a bad case of death otherwise. Martini’s distraction earns himself an ejection and NOW the Jay Driller puts Lethal through the table as we take a third break.

Back with both guys inside and Briscoe running into a superkick, only to counter the Lethal Injection with a discus lariat.  Lethal grabs the Injection out of nowhere for a very close two and Corino can barely keep going. With nothing else working, Lethal grabs a Jay Driller, followed by another Lethal Injection to finally become undisputed champion at 27:13.

From the 19th Anniversary Show.

Gresham is defending and is giving up over a foot to Draper. They stare at each other a bit until Gresham’s takedown attempt goes nowhere. Draper takes him down instead and drives a forearm into the face. Back up and Gresham has to jump to grab a headlock, setting up a forearm to Draper’s face to even things up. Another knockdown has Gresham in trouble but he avoids a handstand knee drop.

Draper grabs him again and this time Gresham has to use a rope break. A rolling waistlock has Gresham in more trouble and he can’t do much with the much bigger Draper. Gresham gets planted again and Draper and twists it over into a rollup for two, which allows Gresham to get back up. Something like a reverse bearhug stays on Gresham’s ribs but he finally grabs the wrist to get a breather, allowing him to dive to the ropes for a second break.

This time Gresham gets to unload in the corner to put Draper down for a change. Draper comes back with a knee into a Stretch Muffler, making Gresham use his last rope break. An armdrag lets Gresham come back with a springboard moonsault press into an ankle lock to put Draper in his most trouble so far. That’s broken up in a hurry though and Draper hits a running crossbody. Another Stretch Muffler is blocked with some kicks to the head and Gresham kicks away at the leg.

A hard forearm to the side of the head gives Gresham two, with Draper having to use the rope. Gresham stays on him and the second rope break is gone too. There’s the ankle lock and Draper is out of rope breaks too. Back up and a hard right hand puts Gresham down, with the referee getting to a nine count until Gresham rolls to the apron, which breaks the count because he moved.

Draper hits a great looking apron superplex, setting up a Doctor Bomb for two. Frustration is setting in but the Magnum Drop is countered into an armdrag. Another attempt is countered into a hurricanrana which is countered into a sunset flip to give Draper two. A big boot sets up a super sitout powerbomb for two more and Draper can’t believe it. Draper kicks at the ribs some more and he tries another Stretch Muffler but the knee gives out. That sends Draper outside so Gresham dives onto him to grab a choke. Draper climbs back in with the hold still on…but he’s out to retain Gresham’s title at 20:29. 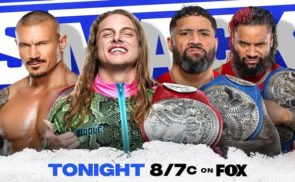