This show has become one of the more intriguing of the minor shows and I’m not sure if that’s a good thing. While it doesn’t feel like it matters in the slightest, they have at least brought it up to another level beyond the useless show it was just a few months ago. Hopefully they can continue with those lofty goals tonight. Let’s get to it.

Ruff gets an entrance for a change. Feeling out process to start and a lockup goes nowhere. Ruff grabs a quick rollup for two and Drake seems to think a little differently in a hurry. Drake takes him down by the arm but Ruff elbows him in the face for a breather. A hard clothesline takes Ruff down though and the comeback is on, including a bulldog into a backsplash. Drake sunset bombs him into the corner and goes up top for a rather delayed top rope elbow and the pin at 3:45.

Video on Isaiah Scott, the same one from NXT.

Mansoor scares Miles into the corner to start so it’s of to Parker instead. A drop toehold into a headlock has Parker in trouble and Martel’s cheap shot earns him an armdrag. Lorcan grabs an armbar on Martel and hands it off to Burch to stomp on the hand. Mansoor’s atomic drop keeps Martel down and it’s off to Miles. That’s fine with Mansoor, who takes him down by the head and unloads with right hands.

Everything breaks down for a second with the villains bailing to the floor in a hurry. We settle down to Miles elbowing Lorcan in the face but Martel sneaks in for a dropkick to take over. It’s Lorcan getting caught in the corner and Miles chokes away on the rope. Ever Rise manages to do something right with an assisted whip into the corner and a step up elbow drop for two.

A shot to the face allows the hot tag to Burch and house is cleaned in a hurry. Everything breaks down again and Burch is pulled to the floor. Mansoor hits his slingshot neckbreaker (dubbed Seek And Destroy) but Miles gets to the floor to save himself. That means a dive from Mansoor and it’s a Samoan drop/top rope Blockbuster combination from Ever Rise to Burch. Another Seek And Destroy misses so Mansoor Oklahoma rolls Miles for the pin at 8:07. 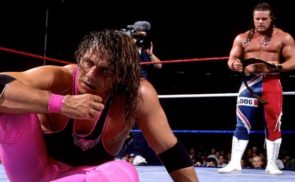