We’re less than two weeks away from Fastlane and you actually know a thing or two about that on this show. The big story continues to be Kofimania, which has you believing that the title could actually change hands at the pay per view. Tonight is the contract signing, where Kofi needs to get in a great promo to really push this forward. Let’s get to it.

We open with the contract signing, as Daniel Bryan and Rowan are in the ring with Shane McMahon and Stephanie McMahon (twice in a week). Shane hypes up the match and shows us some of Kofi’s career highlights in a really good package (including his first match on ECW). With that out of the way, Stephanie talks about Kofi’s recent history such as two weeks ago when he lasted over an hour in the gauntlet match with a “globally trending” victory over Bryan.

This brings out New Day (Stephanie gets to dance of course because she’s fun that way) with Kofi saying that he’s been here for eleven years and he’s FINALLY getting a chance. He wouldn’t be here without Big E. and Xavier Woods and we stop for a YOU DESERVE IT chant. There’s only one thing left for him to do now, and he’ll do it at Fastlane when he beats Bryan to become WWE Champion. They both sign….and here’s Vince McMahon.

Vince thanks Kofi for everything but it’s his job to give the fans the biggest matches they can get. That’s why Kofi is being replaced at Fastlane with a returning superstar who will face Bryan instead. That man is…..Kevin Owens. Kevin comes out and signs as New Day protests, though Kofi is devastated.

Post break Owens comes in to see Shane and Stephanie, saying that even though they had nothing to do with the title shot, he’s very thankful. As for tonight, he’d like to team with Kofi against Rowan and Bryan. It’s officially under advisement.

The Bar vs. Hardy Boyz

So much for Gargano vs. Cesaro. Or Matt’s retirement. Jeff works on Cesaro’s arm to start and it’s off to a MUCH slimmer Matt to stay on that arm. The Bar is sent outside for a dive from Jeff and we take a break. Back with Jeff getting clotheslined down but managing the tag off to Matt anyway. Matt drops a quick middle rope elbow but telegraphs the Twist of Fate, allowing Cesaro to send him into the ropes instead. Sheamus adds a kick to the face for two but Jeff grabs the Twisting Stunner on Sheamus to give Matt two. The Twist of Fate takes him down again and the Swanton gives Jeff the pin at 8:14.

Ricochet and Aleister Black are in the back when Lana comes up to say they’re nothing special. Ricochet is nothing special but he says Rusev can’t crush what he can’t catch. Black says Rusev and Shinsuke Nakamura will fade to black tonight. Lana smiles and leaves.

Here are R-Truth and Carmella for a chat. Ever since he was a little tyke, he’s wanted to be like his hero: John Cena. That’s why he’s following a tradition and issuing a US Open Challenge….after this Dance Break. Cue Andrade but Rey Mysterio jumps him from behind and slides in the ring first. Andrade gets in as well but Truth says he’s at a crossroads and doesn’t know who to face right now. He asks himself what John Cena would do so Carmella suggests the triple threat. Truth: “He would face both of them? D*** he brave.” The triple threat is on anyway.

US Title: R-Truth vs. Rey Mysterio vs. Andrade

Truth is defending. Andrade kicks Rey in the face at the bell but gets hurricanranaed out to the floor. Truth is right back with the Lie Detector for two on Rey but Andrade powerbombs him off the apron instead. The sliding splash is dropkicked out of the air though and we take a break. Back with Andrade getting caught in a Doomsday hurricanrana, followed by Truth and Mysterio hitting stereo crossbodies.

Andrade is somehow back up and gets caught by Truth hitting John Cena’s finishing sequence with the Five Knuckle Shuffle getting two. Zelina Vega breaks up the AA and Andrade sends him into the post. Rey is right back up with a headscissors but the 619 misses. A hard spinning back elbow to the mask gives Andrade two. Truth gets back in and ducks a 619 which hits Andrade instead, allowing Andrade to roll Mysterio up to retain at 6:49.

Result: R-Truth b. Rey Mysterio and Andrade – Rollup to Mysterio (6:49)

Post match Andrade goes after Rey but has to duck another 619.

We look back at Ronda Rousey laying down the Raw Women’s Title last night.

Here’s Charlotte to talk about what happened on Raw. She compares herself to Kevin Owens earlier tonight because she’s here to save Wrestlemania. Charlotte isn’t scared of Wrestlemania and shows us a clip of Ronda from November where she says if you can’t do your job as champion you need to step aside. She’ll be on Raw to see what Ronda thinks about Wrestlemania.

Of note: Black and Ricochet’s name graphics both say NXT. Black and Nakamura start things off with some grappling against the ropes, followed by a quick tag to Ricochet. That means a sliding dropkick to Nakamura’s head but Rusev comes in with a suplex to take over. It doesn’t last long again though as Ricochet rolls over and makes the tag off to Black, who is kicked straight out to the floor for a running clothesline from Rusev.

Back from a break with Rusev kicking Black in the spine and telling the rookie (even though Black debuted nearly seven years before Rusev) to hit him. A bearhug goes on and Black can’t do much to fight back. A belly to back suplex finally gets Black out of trouble and the hot tag brings in Ricochet to clean house.

The springboard elbow to the face sets up a running shooting star press for two on Rusev, who catches a spinning crossbody. Everything breaks down and Rusev gets sent to the floor for the Fosbury Flop from Ricochet. The legal Black comes in and takes the reverse exploder from Nakamura, who loads up Kinshasa….which is countered by Black Mass for the pin at 10:10.

AJ Styles is glad that Roman Reigns is in remission but doesn’t want to hear about being in a slump. He sets his own standards but he didn’t succeed in stopping the reign of Daniel Bryan. Nothing was given to him and he’s going to stop listening to the critics. He’s ready for the next challenger and is ready to prove that this is the house that AJ Styles built. Randy Orton comes in and doesn’t seem impressed.

Before the break, we were told the Usos would be out here. The following is not the Usos.

Rowan shoves the upset Kofi down to start so it’s off to Owens to try his luck. Owens slugs away but gets caught with a dropkick of all things for two. It’s off to Bryan who gets elbowed in the face to send him outside. That means the big running flip dive from Owens and we take a break.

Back with Rowan cranking on Kofi’s neck before it’s back to Bryan for some nose ripping. Rowan comes back in to drive Kofi ribs first into the corner, setting up Bryan’s top rope superplex for two. The LeBell Lock goes on but a boot on the rope gives Kofi a breather. Kofi hits the double stomp out of the corner and brings Owens in to beat up both villains.

A superkick knocks Owens off the apron and the Pop Up (sitout this time) powerbomb gets two on Bryan. Owens leans over the ropes so Rowan can hit him in the face. Kofi dives onto Rowan and posts him though, allowing Owens to avoid a charge and Stun Bryan for the pin at 16:20. 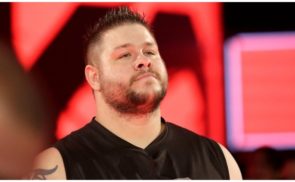