I don’t even know where we are around here anymore. We’re very slowly building towards Final Battle, but Ring of Honor seems happy with only setting things up one match at a time. It’s like they don’t care about their own pay per view, but based on the TV shows lately, I’m not sure if they care about anything. Let’s get to it.

We look at clips of Dragon Lee vs. Jeff Cobb from the Experience, a fan voted on show with Cobb being chosen as Lee’s opponent. Lee wins with a crucifix.

Clips of Rush/Shane Taylor vs. Dalton Castle/Matt Taven where Castle and Taven couldn’t get along and Taylor pinned Castle for the win.

Video on Bateman, who Tombstones people and has nice facial hair.

We look at some of the new talent in the company.

Draper won the Top Prospect Tournament but Nova says Draper never beat him. Draper gives Nova a participation ribbon to start but it’s quickly returned. Nova tries a quick knee to the face but gets thrown to the floor for his efforts. Back in and a tilt-a-whirl powerslam plants Nova again and it’s time to pose a bit. A knee drop sets up a delayed suplex but Nova knees his way to freedom. Draper clotheslines him right back down so Nova chops away to little avail. The cross armbreaker is blocked and Draper picks him up for the powerbomb. The Magnum Drop (Wasteland) finishes Nova at 4:33.

Here are Brian Zane’s Top Five Final Battle moments, in chronological order, with….well no winner actually since it wasn’t a countdown. It included Low Ki vs. Kenta, Bryan Danielson vs. Takeshi Morishima in a Fight Without Honor, El Generico vs. Kevin Steen Mask vs. Career, the Young Bucks vs. SCU vs. Briscoes in a Ladder War and Austin Aries vs. Samoa Joe with Aries finally taking the title.

Enterprises are defending, but with ROH legend Dan Maff replacing the injured Brody King. The challengers were voted on by the fans. Cabana and Scurll start things off with some technical stuff with Marty stopping to show off the muscles. Marty takes him down with a test of strength but can’t break Cabana’s bridge on the mat. Instead Cabana tells him to STOP….and grabs another wristlock. Scurll offers to let Cabana pose but it’s Cheeseburger coming in instead. Cheeseburger gets PCO instead and the beating is on in a hurry.

Some kicks to the ribs have no effect on PCO so it’s Cobb coming in to face Maff. The exchange of shoulders and forearms don’t get us anywhere until Maff hits a hard shoulder to put him down. Cheeseburger comes back in and tries a sleeper, earning himself something like a running Death Valley Driver into the corner. Back from a break with Cabana hitting the Flying Apple for two on Scurll, meaning it’s time to miss the Bionic Elbow.

Cobb and PCO get to slug it out some more as everything breaks down. Scurll backdrops PCO onto a bunch of people on the floor but Maff breaks up a dive….so he can hit his own. Back in and it’s Cobb getting crushed in the corner, setting up PCO’s chokeslam and an assisted backsplash from Maff. Cobb breaks up the chickenwing attempt though and muscles Maff up for a heck of a superplex. Cheeseburger comes back in and a series of shots to the head gets two on Scurll.

The Shotei misses though and Scurll suplexes Cheeseburger down. PCO’s Swanton to the apron only hits apron though and it’s a top rope double stomp for two. The Shotei takes PCO to his knee…but he’s right back up with a Tombstone to Cheeseburger….and a double chokeslam to Cobb and Cabana at the same time. The PCOsault hits Cheeseburger but Maff is legal and hits a Burning Hammer to end Cheeseburger at 15:11. 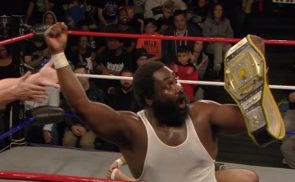