REVIEW: All Wheels Wrestling Pilot: Yes, This Is Real

So for reasons that I do not want to understand, a group decided that a racing themed wrestling show had legs, so some of the TNA crew put this together. I’ve heard of it for years and finally found a copy of it online. This is the only event the promotion (if it counts as one) ever produced so this has some potential. Let’s get to it.

Various professional drivers explain the concept: the roster is divided into four teams of three men each and the winner gets a cup at the end of the season. You can tell that the drivers have almost no idea why they’re talking about this and the quick edits are rather telling.

Tonight is a Captains Showcase so we meet said captains:

Team Defiance (off road, street racing, drifting) is captained by Dubai (Shawn Daivari) and appear to be the bad guys.

Team Dyno (monster trucks, supercross, dirt tracks) is captained by Awesome Aaron Aguliera (or Human Cyclone, as he goes by both) and seem to want carnage.

The commentators, plus Hermie Sadler (former NASCAR driver) are in the six sided ring to welcome us to the show and explain the concept: two Speed Matches (five minute Iron Man matches) leading up to the BIG AIR Challenge (Ultimate X).

More drivers talk about how interested they are. Really. They mean it.

Other drivers confirm that you are in fact watching the show you are watching.

Even more drivers talk about fans and strategy for surviving a season. And no, none of the wrestlers have stood out to them yet.

This is a Speed Match, meaning a five minute Iron Man match….or kind of at least as we have a POINTS SYSTEM.

3 if the match goes to a draw

RPM flips over him to start and hits a running STO (Slingshot) for a pin at 34 seconds. After a ten second recovery period, Dubai jumps him outside and then hard into the steps. Back in the WMDDT (because that’s very racing related) gives Dubai the pin to tie it up at 1:56. The nerve hold goes on but RPM is back up with an enziguri for a breather. The cartwheel into a basement dropkick that Jay Lethal does (but remember, this is RPM) gets two but Dubai catches him on top. A sunset bomb brings Dubai back down for two though and we hit the Boston crab for the tap at 4:51. Time expires at 5:00 with Octane winning 9-4.

Rating: C. Oh boy indeed this is going to be a messy concept. The points system is at least unique and offers something different, but having three falls in five minutes is more than a bit to take. Also, the match wasn’t even that good. Daivari and Lethal are going to give you a competent match, but it wasn’t anything above ok. They are playing into the speed thing and that works, but it doesn’t make for the best wrestling format.

All Wheels Wrestling is like motocross because they both have points!

We get another explanation of how the season points competition works.

A DRIVER TELLS YOU WHAT YOU ARE WATCHING!

Remember how there has been one match with two teams scoring? Here’s the leader board just in case!

Another five minute Speed Match, so here is the points system again:

3 if the match goes to a draw

Schwagg hits a dropkick to start and then does it again for a bonus. Aguliera is knocked outside so Schwagg hits an Asai moonsault, right in front of Team Octane’s pit box, because Team Octane has a pit box. Back in and Aguliera hits a tilt-a-whirl backbreaker for two (count, not points). Aguliera uses his leg to put on something like an abdominal stretch on the mat (that was different) but misses a charge in the corner.

Schwagg’s top rope splash hits knees though and Aguliera gets the pin at 2:32. A chokebreaker gives Aguliera another pin at 3:10 and he does it again for a third pin at 3:34. Schwagg manages a superkick but stops to pose for no logical reason, allowing Aguliera to pull him into a helicopter bomb for the fourth pin at 4:33. Aguliera grabs a full nelson but time expires at 5:00.

Rating: C-. This felt like you were messing around on No Mercy and seeing how many falls you could run up in a few minutes. Aguliera totally squashed him here and made Schwagg look worse than he does by being called Schwagg D. On top of that, given how this show has gone, I fully expect Schwagg to win the main event and come out on top anyway, but at least they went in a different direction here.

The captains talk about how what they need to do to win the Big Air Challenge.

Dubai promises to take Defiance to the pole position and victory lane.

We look at the two Speed Matches. In case you haven’t caught on, this show REALLY shouldn’t be this long.

Schwagg D is ready to use speed to win the Big Air Challenge.

Ultimate X, meaning you climb across the ropes hanging (in an X) above the ring to grab the All Wheels Wrestling logo for 20 points. Everyone but Aguliera goes up to start so he pulls all of them down. RPM slugs away at Aguliera before Dubai comes in to dive onto Aguliera on the floor. That lets RPM go for the W but Schwagg springboards in to dropkick him back down. Back up and RPM dives onto everyone else at ringside and we take a break.

Back with….Hermie Sadler conducting a mid-match interview with RPM, who says he knows he has what it takes to win. Well that’s something new. RPM and Schwagg go up but get pulled back down, leaving Aguliera to run the ropes for a spinning clothesline ala Bull Buchanan. Schwagg pulls Aguliera down and a double superkick drops Aguliera again. A Downward Spiral/DDT combination has Schwagg and Dubai down again, leaving RPM as the only one standing. Again, everyone but Aguliera goes up top and wind up fighting from the ropes. RPM and Dubai fall, leaving Schwagg to pull down the W for the win at 14:11.

Rating: C+. It was a simple Ultimate X match with no major spots and nothing out of the ordinary, but even a not so great Ultimate X match is pretty good. The main thing here is that they put 720 back into contention, which was about as predictable as you could have gotten. Aguliera continues to look like a force and the other two were just kind of there, making this a fitting end to the show.

We get a look at the rest of the season, which seems to consist of clips from this show, drivers talking about how excited they are, and racing clips.

Next week: the teams are revealed! As far as I can find, no other wrestlers were ever actually named.

Overall Rating: D+. Where do you start with this one? First of all, no, this isn’t the worst show I’ve ever seen or anywhere near close to it. Instead, it’s one of the weirdest concepts I’ve ever seen, as racing and wrestling do not work together when you move the idea off paper. The Speed Matches were at least a bit of an interesting twist, but the CONSTANT clips from racers and drivers who clearly were just saying what someone told them to say and clips of races, there was nothing here.

This show would have been WAY better at thirty minutes with a lot of the other stuff cut out and maybe a four way as a finale. It is absolutely not a secret as to why this didn’t get picked up because it just wasn’t an interesting idea. The wrestling was completely watchable, but this was an idea that was never going to work and it’s nothing more than a novelty footnote that you don’t need to see. 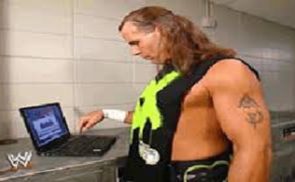 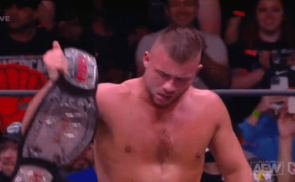