The reign of the Great Khali continues as we are nine days away from Summerslam. I’m curious to see where they are going with the rest of the card, but Khali has already massacred Batista with the Claw. With the main event set, we could use some build for a few more of the matches. Let’s get to it.

Here is MVP for the first episode of his VIP Lounge talk show. MVP talks about being better than you and challenging Matt Hardy to face him in a boxing match at Madison Square Garden on Saturday Night’s Main Event. However, MVP has to back out due to his heart condition, but he has a replacement: the only four time World Heavyweight Champion, Evander Holyfield.

This brings out Matt Hardy as the show’s first guest, with Matt talking about how he has beaten MVP in arm wrestling and a wrestling match, but now MVP is running again. MVP again brings up his heart condition but Matt says it’s the lack of a heart. Matt is fine with fighting Holyfield, but MVP has a challenge for him tonight.

That would be the Masterlock Challenge, with Chris Masters and a referee coming out. Before we get started, Matt punches Masters in the face but the hold is finally put on. MVP does commentary as Matt starts blacking out and then gets in the ring to kick Matt down to cut off the comeback. The villains go to leave but come back in for the Playmaker and trash talk to Matt.

We recap Vince McMahon finding out that he has an illegitimate child on the roster.

Vince is here, in a peach colored jacket, with Coach, who has been put in charge of checking the roster to find out who Vince’s child might be. The ECW roster has been checked off the list, save for Big Daddy V. Vince thinks it’s a possibility, but wants everyone here tonight checked too.

Jesse and Festus with they could be Vince’s son. Well Jesse does, while Festus (who Jesse thinks looks like Vince) stares a lot.

Non-title. Domino shrugs off a wristlock to start so it’s off to Brian for some more success on the arm. There’s a double flapjack to Domino but it’s quickly off to Deuce to take over on Brett. The chinlock with a knee in the back makes it worse, setting up Domino’s neckbreaker for two. A suplex finally gets Brett out of trouble and the hot tag brings in Brian to clean house. Brian hits a spinebuster for two but misses a high crossbody. Deuce cracks him in the mouth for the pin.

Rating: C. I’m not sure if there is a tag team division at the moment but it’s nice to see another team getting the chance to crack into the title picture. Deuce N Domino have no one to fight for the belts at the moment so why not see what the Majors can do in the spot? It’s not like there is anyone else at the moment so work with what you have.

Vince McMahon and Coach are in Teddy Long’s office to offer best wishes on Teddy and Kristal’s wedding. Great Khali and Runjin Singh come in to yell about having to face Kane tonight. Teddy says get over it but Vince isn’t sure about Khali’s parentage. He seems to like the idea though and did have that one time in India.

We recap Kane and Finlay attacking each other last week.

Finlay powers him into the corner to start and then does it again, only to have Noble slug away. Noble manages to knock him outside but Finlay is right back in to work on the leg. A slam sends Noble’s leg into the ropes and the half crab goes on. An Indian Deathlock makes it worse….and here is Kane to go after Finlay for the DQ.

Rating: C. They didn’t have time to do much here but it was good while it lasted. Noble was little more than a comedy guy at the moment but he was able to have a good match with just about anyone. That being said, this was all about setting up Finlay vs. Kane, likely for Summerslam, and that should be a good fight.

Post match the brawl is on but here is Hornswoggle to shove Noble into Kane’s bad ribs. Kane chokeslams Noble and Finlay escapes.

Rey Mysterio is coming back at Summerslam.

Chavo still has the Rey Mysterio mask from last week. Moore gets taken down to start and charges into an elbow in the corner. A running headscissors sends Chavo outside but he is ready for the dive, instead suplexing Moore into the post. Back in and a stretch muffler keeps Moore in trouble but he pops out and is fine enough to hit a Whisper in the Wind. The Gory Bomb is countered into a sunset flip for two, only to have Chavo come back with a brainbuster for the pin.

Rating: D+. What the heck was that? I don’t know what Shannon was going for here but Chavo worked on the knee for a bit and Moore hopped up to hit a big flip off the top. I can forgive a bit of no selling but what’s the point of Chavo posting the leg and then working on it if that’s the reaction he is going to get? Not a good match, and that’s because of Moore in this case.

Post match Chavo puts the mask on Moore and gives him a frog splash to the knee.

Here is Batista for a chat. He admits that he is a little grouchy but he has had all week to stew about what happened. Last week, Great Khali crushed Ric Flair’s skull and treated him like a piece of dirt. That freak wrapped those hands around his head like a vice grip and that has never happened to Batista before. Right here and right now, he is promising himself and Flair that….and never mind as here is Khali on screen to interrupt.

Khali demonstrates what is coming for Batista at Summerslam by popping a basketball. Batista goes on a rant about how basketballs don’t hold grudges, which makes it sound like he is feuding with the ball. A ticked off Batista is a good thing but I’m not sure how well the title match is going to go.

Vince McMahon and Coach keep going over the idea of Vince being Khali’s dad, but Coach thinks Batista might have gotten his great physique from McMahon too. Vince seems to improve….and here is Big Dick Johnson dressed as a baby for some dancing. With Vince turning his back, Coach starts dancing too because he’s a goof at heart.

Cardona goes for a waistlock to start and gets tossed down in a hurry. Henry throws him to the floor with no trouble and then stands on his head back inside. A backbreaker sets up a World’s Strongest Slam and a bearhug to give Henry the squash win. Cardona is better known as Trent Beretta, but I wonder if he was borrowing the future Zack Ryder’s real last name.

Post match Henry goes on a rant about Undertaker’s druid coming out last week and suggesting that Undertaker was coming back. We see another clip of Henry wrecking Undertaker and, just like last week, the feed is hacked to hint that Undertaker is coming back at Unforgiven. Then the gong goes off and there is a small pile of sand in the aisle. Henry picks it up, lets it fall through his fingers, and that’s it.

Torrie Wilson and Michelle McCool are going to be the bridesmaids in the wedding. Victoria comes in and is really glad that she’ll be one too, but that isn’t happening. Victoria slaps Michelle, who slaps Kenny Dykstra instead. Teddy Long makes the match for tonight.

Jimmy Wang Yang and Funaki come up to Vince McMahon to suggest they are his son. Vince says he wasn’t in Japan long, but here is Kane to laugh and call Vince dad.

Kenny Dykstra is here too. Victoria yells at her to start and gets thrown to the floor for her efforts. Back in and Victoria takes her down without much trouble and rips at Michelle’s face. The top wristlock keeps Michelle in trouble as commentary talks about a bunch of celebrities weddings. Michelle comes back with some armdrags and kicks Victoria down, setting up a middle rope clothesline for the pin.

Rating: D+. The division continues to be in a weird place as they have these random setups for a match every week and then get about five minutes at most. You can only get so far on something like that and I think we’re at that point now. I’m not sure what they can do without more wrestlers or something to fight over, but that needs to be figured out.

HHH is coming back at Summerslam.

Vince McMahon and Coach are about to leave but here is Howard Finkel of all people to suggest he might be the son. Vince shoves him away.

Non-title, Runjin Singh is here with Khali and Kane has bad ribs. Khali goes after the ribs to start but gets knocked outside where Kane can hit an uppercut. Back in and Khali knocks him out of the air, allowing him to hammer on the ribs again. We hit a rib claw, but since that’s just putting a hand on his ribs, Kane is able to fight up and pound away in the corner. The chokeslam is countered with the Claw though and Kane finally goes down for the pin.

Rating: D. I know he can only do so much, but Khali rubbing the side of Kane’s stomach for a good chunk of the match is not exactly thrilling television. The Claw vs. choke deal at the end was just about the only thing they needed to do here but it was a rough way to get there. Khali is showing how limited he is here and that is making it hard to watch.

Post match here is Finlay to go after Kane again but Batista runs in to go after Khali. Finlay gets speared down again but Khali head vices Batista out to end the show.

Overall Rating: C-. There were good and bad parts here, with Vince getting to interact with a bunch of people and that is always going to work. The rest of the show was up and down at best, with some of the matches being little better than dreadful. The good thing is that Summerslam is mostly set, but the idea of Batista vs. Khali in a big match has the potential to be a train wreck. Smackdown has been trending down since Khali won the title and that is making this show rougher every week. 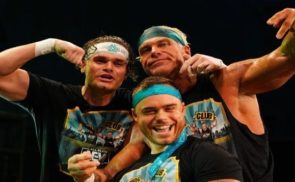