It’s a special show as we are in London and it’s time for a Wrestlemania rematch. The main event of this week’s show will see WWE Champion John Cena facing Shawn Michaels in a non-title match. That’s not a bad way to spend Cena’s thirtieth birthday and they can probably do some good stuff. Let’s get to it.

Here is Shane McMahon, seemingly ready for a match, to get things going. Shane says that Bobby Lashley won’t be here tonight because he has been busy costing Vince McMahon his hair and Umaga the Intercontinental Title. We see a clip of Santino Marella debuting last week and winning the title with an assist from Lashley.

Since it’s St. George’s Day, Shane is going to let a fan have a chance to slay the ultimate dragon: Shane himself. Shane says we can even make it no holds barred and it can be someone from the crowd. After turning down the Chelsea coach, Shane says he has a better idea: a man he saw beat up six people last night in a pub.

The fans don’t seem to know who Brookside is, though he had been around for over twenty years at this point. Shane grabs a headlock to start and takes him down for some knees to the back. Some kicks to the ribs keep Brookside in trouble and Shane hammers away in the corner. The trashcan is loaded up and Coast To Coast knocks Brookside silly. Hold on though as Shane just remembered that this is a handicap match.

Umaga gets in his own shots and hits the running hip attack in the corner. The top rope splash connects, but Shane remembers that he has one more partner.

Vince comes in and gets the pin. I credit the hat for his victory.

Rating: C-. What else is there to say to this? It was an angle instead of a match and not a great one at that, but at least they made the villains look like villains. Shane had Brookside beat on his own and kept bringing in more and more people, which made them look like monsters. That’s a good idea for something like this and it was a good way to build them up for Lashley on Sunday.

Video on John Cena vs. Shawn Michaels from Wrestlemania.

Time for part two of WWE’s favorite way to book a tag team feud. They fight over a lockup to start with Murdoch powering him into the corner. Hardy fights out but Murdoch pulls him off the middle rope for a crash. A neckbreaker drops Matt again but he avoids a middle rope elbow. The comeback is on, including the bulldog out of the corner and the Side Effect for two. Matt misses a charge into the corner though and Murdoch hits something like a Canadian Destroyer for the pin.

Rating: C. WWE has long since loved this idea as the Texas boys are now 2-0 in singles matches against the Hardys. As luck would have it, now they are going to be getting a Tag Team Titles hot on Sunday and now there might be some doubt about who is winning. That’s about all they have in the division at the moment, so go with it.

Non-title. Melina drives her into the corner to choke a lot, then bends Maria’s neck across the rope. Maria’s headscissors doesn’t do her much good as a swinging hair faceplant finishes in a hurry for Melina.

Ric Flair is ready to go the ring with Carlito, who is doing this on his own. Flair doesn’t seem thrilled.

Carlito goes after him to start and manages to stagger Khali but gets knocked out of the air. The double chokeslam finishes Carlito in a hurry.

Post match Ric Flair comes out to check on Carlito, who wants nothing from him.

Mick Foley joins us for a cheap pop and talks about guest GM Michael Pena making the four way main event for Backlash. Edge pops in to say he is glad the match was made and he is going to watch John Cena vs. Shawn Michaels before taking out Randy Orton tonight.

Shawn Michaels runs into John Cena in the back. Cena talks about all of Shawn’s nicknames, but Cena’s only nickname is the champ. This was serious Cena and that is a good thing.

Non-title and we even get an old school weapons check. Shawn takes him down by the arm to start but gets reversed into a headscissors for the early break. Back up and Shawn goes after the arm again so Cena tries an STF to send Shawn bailing again. Another STF attempt has Cena running into the corner so they go technical for a change. Cena doesn’t care for that and powers him down to the mat, sending Shawn to the ropes again. They trade shots to the face and we take an early break.

Back with Cena grabbing a headlock takeover to grind Shawn down for a change. It works so well that Cena does it again and Shawn can’t get out of it in his first few attempts. Shawn fights up again and tries a hiptoss, only to get blasts with a clothesline to set up the chinlock again. The next escape attempt actually works and Shawn hammers away to take over for the first time. Cena gets a boot up in the corner though and a heck of a clothesline gets two.

A Sweet Chin Music attempt is countered into an AA attempt but Shawn bails out to the floor as we take another break. Back with Shawn elbowing away in the corner until Cena catches him with a World’s Strongest Slam. The release fisherman’s suplex gets two and the Throwback is good for the same. Shawn comes back with a quick swinging neckbreaker and they’re both down for a breather. Back up and the flying forearm drops Cena so Shawn can nip up.

The top rope elbow connects but Cena is ready for Sweet Chin Music. The big flying shoulder misses and Cena falls to the floor….where he is fine enough to pull Shawn’s dive out of the air. A posting is countered into a ram into the steps to leave Cena down as we take another break. Back again with Cena down on the floor, seemingly with a bad shoulder, so Shawn takes him back inside to crank on the arm. Cena fights up and initiates the finishing sequence, including the Shuffle. The FU gets two and that brings the fans back into things as we take a fourth break.

We come back again with Cena throwing him hard to the floor to bang up Shawn’s back even more. A posting gives Cena two back inside and the kickout has him a little stunned. Cena scores with a suplex (with Shawn still holding his back for a nice touch) for two and it’s off to the rather wise bearhug.

Shawn fights out so Cena dumps him over the top for the crash to the floor, setting up the top rope legdrop for two back inside. The super FU is countered into a powerbomb but Shawn can’t follow up. Another STF attempt earns another block and Shawn knocks him off the apron, into the announcers’ table. A piledriver onto the steps, ala Wrestlemania, is blocked and we take another break.

We come back again with Cena unloading on Shawn on the announcers’ table and NOW the STF can go on inside. The long form crawl gets Shawn to the rope for the break but he has to slip out of the FU….and hit Sweet Chin Music for a very delayed two. Shawn is whipped hard into the corner so Cena tries the FU again, only to have Shawn get out and hit the superkick, this time falling on top for the pin (after about 55 minutes, a Raw record for a one fall match).

Rating: A-. What else is there to say about this? It’s one of the best TV matches of all time as it is both very long and also high quality throughout. You almost never get to see that and they made it work very well here. It’s an excellent match and felt like a Wrestlemania worthy main event. You could go back and forth on which was better, but this is going to be very hard to top for a long time to come.

Shawn says something to Cena and holds up the title to end the show. Edge vs. Orton didn’t happen, which I’m assuming has something to do with Orton being sent home from the tour. Good chance that’s why this match had to go so long.

Overall Rating: B. A show with a match like that is going to carry you about as far as you need to go and make up for almost anything else taking place. That was the case here, as the rest of the show was mostly skippable, only to have an all time classic bail it out. About half of the show is spent on one outstanding match and that is more than enough to carry this whole thing. Great match, which makes for a pretty awesome show. 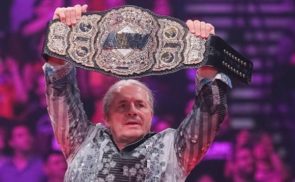