Retribution May Have Already Lost A Core Member

Well that was quick. One of the biggest stories taking place over the last few months in WWE has been the rise of Retribution. The group debuted back in August and has attacked Monday Night Raw in one way or another. WWE has since brought them in as official members of the roster, which was enough for Retribution to mostly unmask. NXT fans could recognize who was behind the masks, but now one of those names might not be around anymore.

Retribution has been built up as a group with seemingly dozens of members, though there are five members who are seen as the core of the group. This week on Monday Night Raw, Mustafa Ali was revealed as the new leader of the team. That was quite the moment and the big change that the team had been looking for. However, another change seemed to have taken place and it is a little bit strange.

On Thursday, Ali sent out a tweet about Retribution, which included names and photos of T-Bar, Mace, Reckoning and SlapJack, plus Ali himself. There was no mention or photo of Mercedes Martinez, suggesting that she may already be out of the team. There is no word on why Martinez was not included and no indication that she is in any trouble with WWE. Martinez is the only member of the team who had not received a new name after joining Retribution.

This could be a huge change. Check out what the team has done so far:

Opinion: This is a case where I want to see where it goes, as you never know if this might be a health issue and a slight delay rather than Martinez being gone for good. The team has not really gotten to do much now that they are actually moving forward, but now they already might be undergoing a new shakeup. Martinez is someone who could be a big deal in the team, but for some reason she wasn’t there this week. Hopefully everything is ok, but it could be quite the hit to the team.

What do you think of Retribution? Is Martinez gone? Let us know in the comments below. 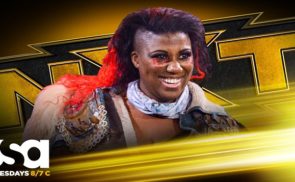