History has been made! We are a week away from the one year anniversary of AEW Dynamite. That is almost hard to believe given how far the company has come in such a short amount of time. The company has a history all of its own, including a variety of championships. AEW has done a good job of making its title changes feel important, and that was the case again this week.

Back in August, Brodie Lee defeated Cody in a completely one sided match to become the second TNT Champion. It was quite the shock, but Cody was back only a few weeks later, looking completely different and ready to fight. That fight came in a big way as Lee wanted to face Cody in a Dog Collar match, which is not the most common match as it is a different level of brutality. It lived up to the hype and something important happened.

This week on AEW Dynamite, Cody defeated Lee in a Dog Collar match to win the TNT Title back, making him the third champion in the title’s history. Both men bled during the match after being hit in the face with the chain. Following the match, Cody announced that he wanted to defend the title the next week, with Orange Cassidy coming out to challenge, with Cody accepting.

It was an emotional title change. Check out Cody’s speech after the match:

Opinion: This is both surprising and not surprising. After having Cody announce that he was going to be hosting a competition show, it was clear that it was little more than a brief delay before he was back. I’m not sure what is going to happen with Lee going forward, but Cody holding the title for a long time to come could be interesting. Or he could lose it to Cassidy next week. Either way, it was a very entertaining match and things are back to where they were about two months ago.

What did you think of the match? How long will Cody hold the title? Let us know in the comments below. 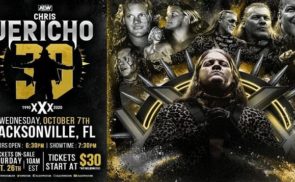