Only room for one? The Raw women’s division has been turned on its head since Becky Lynch announced that she was taking maternity leave. That is the kind of thing you can’t plan for and WWE was thrown for a loop when it happened. The move left a huge hole to be filled in the division but thankfully there were several names available to take care of things. One has been missing though and now we know why.

Earlier this year, Shayna Baszler made her official main roster debut at the Royal Rumble. This was a move that a lot of fans had been waiting on for a long time now and it was great to see it finally happen. Baszler went on to unsuccessfully challenge Lynch for the Raw Women’s Title at WrestleMania 36 but it seemed her time was coming. It hasn’t yet though, and that is a little strange.

According to Wrestling Observer Radio, Baszler has been absent from Monday Night Raw to make Nia Jax the lone heel on the show. The idea is to protect Jax as the only heel on Monday Night Raw, leaving her to go after Asuka and the Raw Women’s Title. Baszler’s most recent match was on the May 12 Monday Night Raw when she defeated Natalya. There is no word on when she will be back.

Baszler can certainly do some things. Check out what she has done in her WWE career:

Opinion: As annoying as this may be, I can’t say I’m surprised in the slightest. Baszler came onto the main roster, lost the Royal Rumble, lost at WrestleMania, and then disappeared about a month later. It was pretty clear from the start that the Monday Night Raw higher ups did not see her as a top star and that is quite the shame. I know she isn’t everyone’s cup of tea, but do we need to go back to Jax doing the same thing again? Apparently so, and Baszler gets to suffer for it.

What do you think of Baszler? Will she ever win the title? Let us know in the comments below. 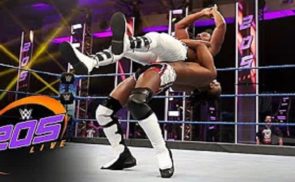