The tournament to crown a new #1 contender to the Heritage Cup is STILL GOING, despite the fact that Tyler Bate could have probably given everyone in the field a shot at this rate. It’s time for another semfinal match this week as we’re finally close to wrapping up. Other than that, stuff will happen. Let’s get to it.

Rohan Raja and the rest of Gallus are here too. Round one begins with Wolfgang going simple by hitting him in the face and then knocking Teoman down into the corner. Teoman punches him in the arm and takes it to the mat with a wristlock. A suplex sets up a failed Crossface attempt so Wolfgang is up with a clothesline, setting up the Caber Toss for the first fall at 2:01.

Round two begins with Wolfgang hammering away again but missing a charge to crash out to the floor. Teoman tries to follow up but gets dropped in a hurry, allowing Wolfgang to take him back inside. Never mind as Teoman is knocked outside again, only to get in a cheap shot to take over. Back in and Teoman scores with a missile dropkick for two. Teoman tries the Crossface but can’t get it on as the round ends.

Round three begins with Teoman winning a slap off until Wolfgang knocks him down. The basement clothesline gives Wolfgang two but Teoman is back on the arm. A running forearm to the side of Wolfgang’s head ties it up at a fall each at 1:12 of the round and 7:17 overall.

Round four begins with Teoman going after the bad arm so Wolfgang uses the good arm to clothesline him down. Teoman ties the arm around the ropes but misses the stomp, allowing Wolfgang to drive him into the corner. A middle rope ax handle connects but the seconds get up on the apron. Not that it matters as Wolfgang hits a spear for the win at 2:45 of the round and 10:04 overall.

Blair Davenport is annoyed that she is still suspended and promises more bad things will happen. Reinstate her.

Gallus has taken over Jordan Devlin’s dressing room and throw him out, stealing his sunglasses in the process. Devlin: “I’M GOING TO TELL JOHNNY SAINT ABOUT THIS!!!”

Joseph Conners is here with Jinny and this is fallout from Dawn drawing a pentagram on Jinny’s mirror last week. Dawn wins an early slugout but Jinny kicks away at the ribs in the corner. A running shoulder lets Jinny hammer away even more but Dawn whips her hard into the corner. Jinny hits a running knee to the face and loads up some kind of a stretch, which is countered into a whip into the ropes.

Dawn is back with her own running knee and some kicks in the corner rock Jinny even more. They head outside where Jinny is sent face first into the apron, sending Conners into a panic. Dawn grabs his wrists and seems to try some kind of a spell to make it worse. Back in and some running knees give Dawn two but she stops to yell at Conners again, allowing Jinny to grab the Facelift out of the corner for the pin at 4:51.

Dani Luna is lifting when Xia Brookside comes up for a friendly challenge. Sure.

Charlie Dempsey is ready to debut next week and demonstrate how to hurt people like they did in the good old days.

Trent Seven challenges Oliver Carter/Ashton Smith to a match against Moustache Mountain next week. Sure, despite Tyler Bate not being here.

The winner gets the next UK Title shot against Ilja Dragunov. Brown has to fight off a double teaming to start and knocks the other two outside in a hurry. Back in and Frazer dropkicks him into the corner, setting up a double dropkick to the floor. Frazer picks up the pace to run/flip away from A-Kid before hitting another hard dropkick. Brown comes in to whip Frazer hard into the corner so A-Kid comes back in to strike away.

A kick to the knee puts Brown down with Frazer joining in, only to have Frazer drop him as well. Brown is back up up to wreck them again, including a toss to send A-Kid into Frazer. A-Kid is knocked outside, leaving Brown to chop away at Frazer. Brown puts Frazer on top but A-Kid is back in to kick away at both of them. A triangle choke has Brown in trouble, or at least it does until he powerbombs A-Kid onto Frazer.

The Doctor Bomb is broken up though and A-Kid is knocked outside, leaving the other two trying to get back up. Frazer takes too long to go up top and has to flip out of a German superplex. A-Kid is sent outside as well, allowing Frazer to dive onto both of them. Back in and Frazer drops both of them again, this time for two on A-Kid. They get up for the circle slugout until Brown hits a double suplex for a double knockdown.

A-Kid is back up with a springboard armdrag/headscissors to put them both down, followed by a high crossbody for two on Frazer. A northern lights suplex sets up a cross armbreaker on Frazer but Brown is back in with a powerbomb for the save. Frazer kicks Brown down again and everyone gets a breather. Somehow Frazer manages to slam Brown and super flipping World’s Strongest Slam A-Kid for two with Brown making a save.

A-Kid is back up with a guillotine on Brown, who reverses it up into a suplex until Frazer nails a superkick for two. Frazer’s springboard is powerslammed out of the air and now the Doctor Bomb can connect. A-Kid superkicks Brown to the floor though and a running kick to the face finishes Frazer for the pin and the title shot at 16:32.

Result: A-Kid b. Nathan Frazer and Rampage Brown – Running kick to the face to Frazer (16:32) 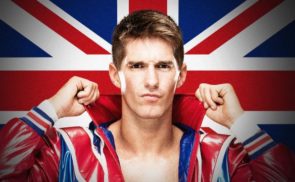