We’re back to the regular shows after two weeks of Best Of editions. They’re back in a big way too with both a #1 contenders match for the Women’s Title and the debut of Ben Carter. Granted Carter is going to be debuting on a talk show but that just means that he is getting into modern wrestling because EVERYONE needs a talk show. Let’s get to it.

The winner gets Kay Lee Ray at some point in the future. They slug it out to start with the much bigger Niven driving her down into the corner for some stomping. Jinny gets out though and hits a running clothesline in the corner. That just earns her a crossbody to send things outside and Piper hammers away. Jinny sends her knee and face first into the post though and Niven has to roll back in.

The Iron Octopus has Piper in more trouble and Jinny elbows her in the back of the head. Piper muscles her up and drops back for the break as Joseph Conners of all people comes out. A hard belly to back suplex and some clotheslines have Jinny in trouble with a low crossbody getting two. Jinny rolls out so Niven loads up a flip dive, only to have Conners take the bullet for her. Back in and Piper picks her up again, only to have Conners pull the leg to give Jinny the rollup pin at 6:50.

Pretty Deadly knows Gallus doesn’t want them in the tag division but they have the champs’ attention. Mission accomplished.

Aoife Valkyrie says the birds don’t try to be perfect. They just are.

Tyler Bate talks about how he needs to change some things. Bruce Lee said “be like water” so he needs to go deep within and find his raw, pure self expression.

Sam Gradwell sees the advice and says the only yogi he knows steals picnic baskets.

It’s time for Noam Dar’s Supernova Sessions. Dar talks about how he has some goals this year, including all the titles, Most Humble, Most Handsome, the lead role in Marine 475, and Trish Stratus’ phone number. His guest is Ben Carpenter (Carter), who Dar asks about his woodworking abilities. Carter clears up his name so Dar yells at his producer because he has seven questions about wood work.

Carter is happy to be here because he wants to face the best. Dar is ready for that but here’s Jordan Devlin to interrupt. Why is Carter on the show before Devlin is? Devlin understands what Carter is about and that’s fair enough but Devlin is the Cruiserweight Champion. Dar says go become the real champion and his people will talk. Carter is on Devlin’s side and says Devlin is as good as he says….so he should have no problem with Carter getting a title shot. Sounds good to Devlin, who says let’s do this tonight. Carter is game and Sid Scala comes out to say they can make the match official.

Kay Lee Ray isn’t worried about Jinny because the title belongs to her.

We look at Levi Muir and Jack Starz beat Saxon Huxley but got beaten down as a result. Dave Mastiff made the save.

Huxley slugs away to start but Mastiff hits him a good bit harder. A running knee to the ribs and a backsplash give Mastiff two but Huxley is right back with a Thesz press. There’s a running knee to Mastiff’s head and a top rope clothesline gets two. Mastiff backdrops his way out of an armbar and throws him down again for two of his own. Another clothesline sets up Into The Void to finish Huxley at 4:44.

Video on Walter vs. A-Kid. Walter respects what he has done but this is a different level. A-Kid disrespected him by acting like he represented this ring so it’s time to pay.

Carter is challenging in his debut but Devlin slams him down to start. Devlin’s wristlock is reversed with a lot of spinning and Carter takes him down into a headlock. Back up and Carter flips out of the corner, ducks under a charge and dropkicks Devlin outside. The dive is broken up and Devlin stands on Carter’s hair. With that not working, he switches to the head and Carter is in early trouble.

Carter gets back up with a sunset flip for two and he sends Devlin into the buckle. A springboard missile dropkick rocks Devlin but a right hand knocks Carter off the top and out to the floor. That’s fine with Devlin as he sends Carter into the steps for two back inside. They both hit crossbodies at the same time and it’s a double knockdown.

Back up and Devlin is sent outside, allowing Carter to hit a moonsault into a Nightmare on Helm Street on the floor. That sets up a swinging suplex for two back inside so Devlin grabs a Spanish Fly for the same. Code Red gives Carter two more but Devlin pulls him into the Cloverleaf. That’s broken up with a grab of the rope so Devlin hits the Kawada kicks into the Devlin Side for the pin at 12:36.

More On WWE’s Plans To Move Damian Priest To SmackDown 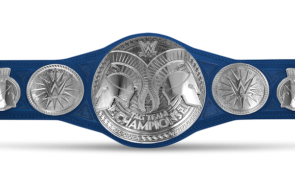