We’re back to something close to normal after last week’s incredible tribute show. Now it’s time for the first half of the New Year’s Smash event, featuring Kenny Omega defending the World Title against Rey Fenix. That alone should be worth everything else and hopefully it lives up to the hype. Let’s get to it.

The Acclaimed rap their way to the ring again, saying they’re the John Cena guys and SCU are Jannetty. Daniels and Bowens start things off and everything breaks down in a few seconds. Triple dives take out the villains, leaving Kazarian to flip over Bowens’ back. The Bucks come back in for the pop up dropkick to Jack Evans and Nick Jackson hits the springboard armdrag/headscissors combination to the Hybrid 2.

There’s the big corkscrew dive for a bonus but Bowens breaks up the Arabian Moonsault onto the pile. The Acclaimed starts in with the double teaming on Daniels, including a basement dropkick for two. It’s off to Angelico to work on the arm, setting up a belly to back suplex/springboard double stomp for another near fall. Bowens hits a Blockbuster into Castor’s top rope elbow into Evans’ 450 into a double arm crank from Angelico.

The Blue Thunder Bomb plants Bowens and gets Daniels out of trouble though, allowing the hot tag to Kazarian. Everything breaks down again and Matt gets to clean house with the flips, followed by a spear to take down Angelico on the floor. There’s another dive to take out Angelico and Castor, setting up a top rope splash/standing moonsault combination for two on Bowens.

The Buckle Bomb into a double enziguri sets up a slingshot legdrop for two more as Jericho is losing it on the near falls. Kazarian and Nick combine for the BTE Trigger and another near fall, setting up Angelico’s swinging Downward Spiral. Evans’ 630 hits raised knees so the Bucks superkick everyone. The Meltzer Driver is broken up so Nick dives onto the pile on the floor. The Best Meltzer Ever finishes Castor at 10:00.

Result: SCU/Young Bucks b. Acclaimed/Hybrid 2 – Best Meltzer Ever to C

Post match Kazarian says he and Daniels have the Bucks’ back, at least until they’re challenging for the titles. Hands are shaken.

Here’s Jon Moxley for his first in-arena appearance since losing the World Title. A lot of people expect him to be out here ranting and raving but he is used to a hard time. That is what he is getting again, but this time he is gritting his teeth, battoning down and getting back into it. Moxley promises to go after Don Callis and Kenny Omega to leave them bloody with a crowbar. As for tonight though, Omega is defending against Rey Fenix, and Moxley isn’t going to interfere with Fenix’s destiny. That isn’t it for Moxley and Omega though, because Moxley has forever.

Chuck Taylor says Trent is going to be out 4-5 months with a torn pectoral muscle. Cue Miro, with Kip Sabian and Penelope Ford, to laugh at him. The time off means that Taylor is out of action for the same 4-5 months, with Miro saying he can be a young boy. Miro has an offer: they can face each other next week and if Miro loses, he’ll leave. If he wins though. Taylor has to be Miro’s young boy until the wedding. Taylor can’t accept fast enough.

Earlier today, Wardlow promised to take care of his family and Hager at the same time. They go to the grappling with Wardlow managing to survive and get back to an armbar. Wardlow takes him down again and it’s time to get serious. Hager takes him into the corner for rights and lefts but Wardlow is out in a hurry. They crash into each other and fall to the floor, meaning we take a break.

Back with Hager being sent into the corner for the shoulders to the ribs. A spinebuster plants Hager again and a suplex slam gives Wardlow two. The F10 is broken up and Hager hits a bunch of clotheslines in the corner. Wardlow sends him out to the apron though and then into the barricade. Back in and Wardlow hits the Swanton but Hager rolls into the triangle. Hager choke some more and takes him all the way to the top. That lets Hager grab the head and arm on the top, only to get sent into the turnbuckle. The F10 finishes Hager 10:35.

Private Party can’t get the gin and juice right so here’s Snoop Dogg to give them the drink. Hugs ensue and Matt Hardy pops in to say that he has Private Party’s new contracts. Private Party has to give Matt 30% of everything but they get their Twitch and Cameo and all that good stuff. Works for them, so they sign.

It’s time for the weigh-in between Brian Cage and Darby Allin for next week’s TNT Title (with the new design debuting) match. Cage weighs 272lbs and Allin is 170, so Taz laughs at Allin’s gear weighing him down. Allin says he knows how this ends so let’s get rid of the garbage and get to the good part. Cue Sting for the save so Team Taz leaves, with Taz swearing a new champion next week. Sting and Allin stare at each other a lot.

MJF hears Hager freaking out and has to place peacemaker. Hager calms down and looks a good bit happier.

We look at Marko Stunt meeting -1 on Dark and getting insulted.

Jurassic Express are ready to get the Tag Team Titles back but here’s FTR to provoke Marko. He promises to win next week and has to be held back.

Snoop Dogg is here with Cody. They run the ropes to start with Sydal kicking him in the leg and snapping off an armdrag. As Snoop does an Arm Anderson imitation (with the play card), the running dropkick in the corner gives Sydal two and Cody is sent out to the ramp. Sydal hits the top rope Meteora for two and they head back inside, where Cody’s skinning the cat is broken up. They’re outside again but this time Cody accidentally hits Serpentico with a right hand before being torn back inside. Sydal hits the high Crossbody but Cody rolls through into a Texas Cloverleaf.

The rope is grabbed though and we take a quick break. Back with Cody hitting a reverse superplex for two but Sydal is back with a jumping knee to the face. The shooting star press hits knees but Sydal spins around, looking to set up the camel clutch. With that broken up, Sydal kicks him in the head, only to have a Cactus Clothesline put them both on the floor. Back in and they try a standing switch until Sydal jumps on his shoulders for a hurricanrana. The Lightning Spiral gives Sydal two but Cody ducks the jumping knee. Back to back Cross Rhodes finish Sydal at 10:02.

Post match the Chaos Project comes in to jump Cody but Snoop makes the save and hits a top rope splash with Sydal counting the pin.

Shida is defending and gets jumped on the ramp. That’s fine with Shida, who cracks her in the head with the kendo stick, but Abadon pops back up. They get inside with Shida hammering away as we get the opening bell. Abadon gets knocked to the apron so Shida kicks at the head and hammers away.

They head outside with Abadon biting the thigh and then dragging Shida underneath the ring. Abadon comes back out first, followed by Shida….whose neck is rather bloody, ala a few weeks back. They head back in, with Abadon slamming her head into the mat. We take a break and come back with Shida pulling Abadon up top for a superplex. Abadon pops back up with a big clothesline but Shida grabs a rollup for two. Shida’s running knee retains the title at 8:27.

Conti promises to win because she’ll have the Dark Order with her.

Fenix is challenging and Omega has Don Callis in his corner. Omega goes to the hammerlock to start so Fenix snaps off flying mare. That earns him a spike hurricanrana so Fenix is back with a hurricanrana of his own for the escape. Omega is sent outside for another hurricanrana from the apron into the big crash. Back in and Omega counters a tornado DDT before chopping Fenix out of the air to break up a springboard.

They head outside with Omega sending him into the barricade a few times, only to have Fenix hit a kick to the head. The rolling cutter is blocked though and the Snapdragon knocks Metalik silly. Fenix gets planted again, followed by being thrown inside for the Kitaro Crusher. The chop off goes to Omega but Fenix starts kicking away, setting up a double springboard dropkick. Omega falls to the floor and Fenix hits the big running flip dive.

Back in and Fenix hits a moonsault into a German suplex for two, followed by a springboard double stomp to the back of Omega’s neck. We take a break and come back with an exchange of kicks to the head for a double knockdown. Omega hits the V Trigger but Fenix gets out to the ramp.

A Callis distraction lets Omega get in a shot of his own but Fenix is right back with the Fire Thunder Driver for two more. The frog splash hits Omega’s raised knees and Fenix is in trouble again. Fenix gets to the top and kicks Omega away, only to flip dive into a tiger driver. The V Trigger connects for two, followed by the One Winged Angel to retain the title at 17:50.

Post match Omega and Callis get in the ring and say they have a bonus in mind. They beat Fenix, so now they can end his career. We cut to the back though where Butcher and Eddie Kingston have jumped Pac and Pentagon. Fenix goes after Fenix again but here’s Jon Moxley with the barbed wire baseball bat for the save.

Cue the Good Brothers (Karl Anderson/Doc Gallows), the Impact Wrestling Tag Team Champions, to take Moxley out. The Magic Killer plants Moxley so Omega unloads with the bat. Wrestlers start jumping the barricade for the failed save attempts and chaos reigns. Cue the Young Bucks to grab the bat….and then superkick Garrison and Pillman. Omega and the Good Brothers do the Too Sweet pose and the Bucks eventually join in to end the show. 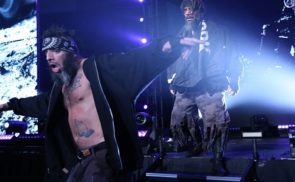