Things toned down a bit last week after back to back title match weeks. This time around seems to be more of the former as well, with the main event being a grudge match between Wolfgang and Jordan Devlin. Other than that, it’s hard to say what we might be getting around here week to week. Let’s get to it.

Hold on though as Williams, in street clothes, is out on crutches. There was a terrible accident so the match cannot happen. Hold on to that holding on though as Sid Scala pops up on screen to say there is no evidence of Williams being injured, so start the match. Gradwell pulls him in and hammers away to start as Williams is rocked early.

A forearm out of the corner staggers Gradwell and a rake to the eyes lets Williams hit a rebound lariat. The cravate goes on for a bit before Williams rakes at the back. Gradwell fights up and hits some clotheslines into a butterfly suplex, only to get rolled up for two. Back up and Williams tries a sunset flip but Gradwell sits down on him for the pin at 3:58.

Post match Williams jumps Gradwell with the crutch as this is indeed going to continue. Williams pulls out some scissors from underneath the ring and cuts off Gradwell’s mohawk to really make this personal. Gradwell is furious.

The Coffeys find this funny but Wolfgang takes it a bit more seriously.

Xia Brookside is very happy to have an interview but she freaks out when she is asked about Amale. Her daddy will be hearing about this!

We recap Jack Starz wanting to earn one of Dave Mastiff’s bomber jackets, meaning Mastiff has some challenges for him.

First up it’s Challenge #1: Bomber Physicality. That means an hour of free squats, but Mastiff forgets to check on him and comes back three hours later, with Jack mostly still squatting and a pool of sweat underneath him.

Challenge #2: Bomber Appetite. Starz has to eat a bunch of what looks to be cookies or crackers.

Challenge #3: Bomber Guts. Starz has to streak through the Performance Center but he can’t do it and runs off (censored) instead.

Sam Gradwell is furious and goes hunting for Kenny Williams.

This time it’s Hayze fighting up and hitting her own forearm for a breather. A running elbow in the corner sets up a Sling Blade for two as McKenzie is having to work here. McKenzie is right back with a fisherman’s neckbreaker into a belly to back suplex for a needed breather. A superkick gives Hayze two more but McKenzie grabs a wheelbarrow faceplant for the pin at 4:57.

Earlier this week, Nathan Frazer talked about how last week’s win over Teoman might shut up Die Familie for a bit. As for facing the Ring General (no name given), he was scared to death of what was in front of him and he didn’t know how he got there. Now he needs something new though, so he’s challenging Ilja Dragunov for the NXT UK Title.

Die Familie is in their apartment, where Teoman says he’s ashamed of his loss. Rohan Raja says Teoman kept his promise of looking after his family, but Teoman says he will never be a loser, as long as the family wins. Charlie Dempsey says the loss might make the family come closer together.

They fight over a lockup to start with Turner taking her into the corner. Grace armdrags her down into an armbar but Turner is back up with a Thesz press. A running boot to the face knocks Grace against the ropes for two and we’re off to the chinlock. Nigel tries to explain Stevie’s futuristic deal as Grace fights up, including a clothesline which is more like a punch to the stomach. Turner cuts that off without much trouble though and finishes with a Side Effect at 4:36.

Sid Scala announces that Meiko Satomura will be presented with a gift next week.

Moustache Mountain is very happy with their Tag Team Titles and now they’re ready to defend against Ashton Smith and Oliver Carter. Smith and Carter are ready too, with the title match coming next week.

Feeling out process to start with Wolfgang driving him into the corner. It’s time to work on the arm, including some driving shoulders to put Devlin down. Back up and Devlin’s running shoulder has no effect so Wolfgang shows him how it’s done, which bangs up the arm even more. Another shoulder puts Devlin on the floor but he pulls Wolfgang outside too. It turns out that it’s a bad idea to brawl with someone named Wolfgang, as Devlin is beaten up against the barricade.

Back in and the slingshot cutter is blocked, allowing Wolfgang to hit a delayed vertical suplex for two. It’s back to the armbar but Devlin knocks him outside. The Asai moonsault is pulled out of the air but Devlin manages to post him shoulder first for a breather. Devlin’s armbar is broken up as well but he kicks at the arm to cut Wolfgang down again. The arm is fine enough to hit a gorilla press drop, only to have Devlin get his knees up to block a moonsault.

Devlin gets a cross armbreaker but Wolfgang is in the ropes almost immediately. There’s a running kick to Wolfgang’s arm and another puts him down on the floor. Back in again and Devlin grabs a hammerlock before kicking at the arm again. Wolfgang manages a catapult over the top to send Devlin outside for a breather before hitting a top rope ax handle back inside.

The spear only hits buckle though and now the slingshot cutter gives Devlin two. Devlin unloads on him with shots to the head but Wolfgang hits a spear, which hurts his arm even more though. Wolfgang goes up top but gets caught with a super Spanish Fly….for two. That’s enough for Devlin, who hits the 450 for the pin at 13:43. 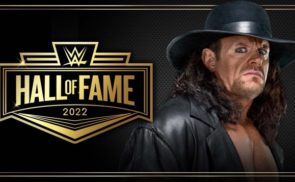 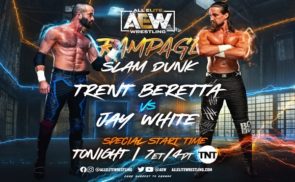