We’re a few hours earlier this week due to the NBA All Star Weekend. This week’s show doesn’t have quite the same level of star power that most weeks have, but Revolution is in about two weeks and it’s time to set up some more things. You can probably guess most of the matches from here though and that’s a good thing. Let’s get to it.

10 shoves him around to start before snapping off a German suplex. The right hands start up in the corner but Cole slips out and kicks 10’s braced knee. The knee is wrapped around the post but 10 is fine enough to hit a delayed vertical suplex. Cole knocks him outside though and it’s right back to the leg as we take a break.

Back with 10 not being able to get the full nelson, meaning Cole can enziguri him into a Backstabber for two. A discus lariat gives 10 his own two but Cole kicks him down again. The Panama Sunrise is countered with a spear for two so 10 grabs the full nelson. Cole drives him into the corner though and it’s a low blow to escape. Some superkicks set up the Boom to give Cole the pin at 9:46.

We look at CM Punk announcing his dog collar match against MJF at Revolution.

Martin strikes away to start and hits a springboard dropkick, followed by a non-springboard version to put Hobbs on the floor. Another springboard is broken up though and Hobbs launches Martin hard into the corner. Then he does it again as commentary points out how that has happened in every qualifying match so far.

We take a break and come back with Martin escaping a bearhug but not getting very far with some running shots to the face. A springboard uppercut works a bit better though and a springboard corkscrew dive to the floor drops Hobbs again. Back in and Martin tries to fly around a bit too much, allowing Hobbs to plant him with a spinebuster for the pin at 9:28.

Jade Cargill wants her next opponent so here is Matt hardy with the Bunny. Matt thinks that would be a money match so Cargill says she’s fine fine with beating up the rabbit lady.

Five Minute Professor Challenge. Deeb takes her down without much trouble to start before sending Risk into the corner. There’s a catapult into the bottom rope for two as Deeb pulls her up. The powerbomb sets up the Serenity Lock for the fast tap at 1:51.

We get the split screen interview, with Jay White saying he’s ready for Trent Beretta, while Trent says he is in fact ready as well.

Orange Cassidy is here with Trent. Commentary hypes up White being the first Grand Slam winner in the history of New Japan, which has been around for decades. White drives him into the corner to start and stomps away until Trent fights up with some chops.

A suplex drops White and they head outside with White being sent into the barricade. Trent clotheslines him down and then heads back inside, only to get suplexed over the top. We take a break and come back with Trent whipping him into the corner and hitting an Asai moonsault. They head back inside where White hits a Downward Spiral into a bridging German suplex for two.

Trent punches and elbows him down against the ropes and White is knocked outside again. Trent’s spear is cut off with a raised knee though and Trent gets suplexed into the barricade. Back in and White hits a spinning Rock Bottom but the Blade Runner is countered into a running knee to give Trent two. They strike is out until Trent hits a piledriver for another near fall. Back up and White grabs the Bladerunner for the fast pin at 15:05.

Post match Cassidy checks on Trent but White bumps into him, which sets up a bit of a showdown to end the show. 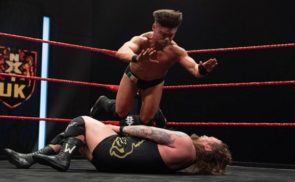