The hiatus continues and this time around we have a new theme with Superstar Picks. It’s exactly what it sounds like with wrestlers picking their favorite matches to air. In theory that is going to be a lot of stuff from NXT UK but I don’t know if that is guaranteed. Let’s get to it.

There is a crawler acknowledging the death of Howard Finkel. That’s certainly better than nothing and about all they could do given the time situation.

Andy welcomes us to the show and explains the idea.

It’s Vince alone on commentary as Tiger sweeps the leg to start, earning himself an elbow to the face. An elbow drop misses so Tiger kicks him hard into the corner. A very spinning takedown takes Kid down and we hit the leg crank as you can tell the fans are impressed with this stuff. Back up and Dynamite grabs a slam to set up a middle rope knee for two, followed by the chinlock.

Tiger bounces out of a headscissors so Kid grabs a suplex to put him right back down. They’re right back to their feet and Mask sends him to the floor, setting up a Tiger Feint Kick (actually at 6:19 on the video’s timer) to really pop the crowd. Back in and Dynamite takes him down for a leg crank, followed by an enziguri for Tiger daring to get back up. The Swan Dive misses though and Mask hits a moonsault for the pin at 6:36.

Jordan and Williams are challenging. Before the match, Gibson says the title match isn’t happening because Jordan is injured. The fans need to put their shoes back on and head home because the fairy tale ending isn’t happening tonight. Williams comes out to accuse the champs of attacking Jordan so he has a replacement partner.

Williams and Dar are challenging. The fight is on in a hurry with all four heading outside. Back in and Dar knocks Gibson into the corner with a northern lights suplex getting two. Drake comes back in for a running dropkick to Dar’s head and it’s a forearm to put him on the floor again. We settle down to Dar getting beaten down with Drake driving a knee into the ribs to keep him in trouble.

A diving save cuts off a hot tag attempt and for once it doesn’t go through a few seconds later. Dar gets in a clothesline and dives over but Gibson pulls Williams to the floor at the last second. The third attempt works a bit better and now it’s Williams coming in to clean house in a hurry. A bulldog sends Drake head first into the corner and a tornado DDT makes it even worse.

The champs head to the floor for a springboard trust fall from Williams, followed by a top rope back elbow for two on Drake. It’s back to Dar for a kick to Gibson’s knee into the ankle lock but Gibson is too close to Drake for the tag. That’s fine with Dar, who ankle locks Drake with a grapevine. Williams does the same to Gibson at the same time but Gibson kicks and punches his way to freedom.

Everyone is down until Drake gets a half crab on Dar’s recently repaired knee. Williams grabs the hand to block the tap and then kicks Drake in the face for the save. A running clothesline has Gibson in trouble but he’s right back with a middle rope Codebreaker to Dar. Williams’ wheelbarrow faceplant gets two on Gibson but Drake breaks up the Nova Roller. That leaves Williams alone against the champs, with Drake hitting a running dropkick in the corner. Helter Skelter into the 450 retains the titles at 13:30.

Non-title. Ray takes her into the corner to start and we don’t get a clean break. Nox gets in a slap of her own and Ray bails to the floor for a breather. Back in and Nox runs her over again, setting up a high crossbody for two. A departing Ray has to be thrown back in but she gets in a shot to the knee in a rather dastardly move. The seated abdominal stretch doesn’t exactly follow up on the knee but makes Nox scream anyway. Ray rolls her into a kick to the chest for two more as Nox keeps checking her knee.

Now it’s off to the other knee as Nox tries to adjust her brace. A gordbuster of all things gives Ray two but she misses a charge into the post to give Nox a breather. The knee is too banged up at the moment though so it’s a lot of clapping while Nox tries to get up. The slugout goes to Nox and she kicks Ray’s leg out for a change. An enziguri from the apron sets up a Molly Go Round (Nox was mentioned as being a Molly Holly fan) for two but Ray is back up with a superkick.

The Gory Bomb is countered into a rollup for two on Ray and Nox superkicks her for the same. Ray is right back up with a tornado DDT for her own two and it’s off to a guillotine in the middle of the ring. Ever the face, Nox powers up with a spinebuster but Ray puts it right back on. This time Nox manages to get to the rope for the break and busts out a chokeslam of all things.

It takes a little too long for Nox to get up top though and Ray crotches her down, only to get caught in the Canadian Destroyer for another near fall. The Shiniest Wizard gets the same with Ray having to get her foot on the rope. They head to the apron and Nox’s running knee goes into the post to crush the dreams. The Gory Bomb finishes Nox at 13:29.

They hit each other very hard:

The Fink is doing entrances, which makes things even better. The disgusted yet also terrified look on Regal’s face is perfect. Cesaro cranks on the arm to start and Regal can’t counter. Antonio takes him to the mat but Regal nips up to draw a gasp from the crowd. Cesaro stays on the hold and takes Regal down again but there’s another nip up. “You still got it!”

Regal takes Cesaro down to his knees but still can’t get away from the wrist control as we take a break. Back with Cesaro still on the arm and jumping onto a standing Regal’s shoulders (basically putting himself in a fireman’s carry) to apply even more pressure. Regal flips him down into an armbar but Cesaro nips up just like Regal did earlier. William takes him down by the other arm but Cesaro powers up into a test of strength.

Cesaro easily powers Regal down but the Englishman counters into a cross arm choke. He leans backwards to put Cesaro over his knees while still choking, only to be flipped forward to escape. Back to the test of strength before Regal counters a front facelock into a dragon sleeper. Cesaro flips him forward in a kind of reverse suplex for two but Regal gets him down into the corner and does his “distract the referee while kicking the opponent in the face” spot.

Antonio chop blocks Regal down and rams the bad knee into the apron a few times as we take another break. Back with Cesaro holding a leg lock but Regal keeps fighting back with kicks to the head. Cesaro keeps control by cranking on the knee even more and taking off Regal’s knee brace. The knee is bent around Cesaro’s neck in an old Brock Lock but Regal counters into a rollup and backslide for two each. Cesaro hits a series of ten uppercuts to knock Regal silly, setting up the Cesaro Swing.

After some trash talk Antonio loads up the Neutralizer but Regal backdrops his way out. He drops a knee on Cesaro’s arm to take away the Neutralizer. Regal goes after the arm with everything he’s got and hits an overhead suplex for two. The knee is too damaged for the knee trembler though and Cesaro comes back with a headbutt. Regal is fine with that and headbutts Cesaro right back before loading up a double underhook suplex. Cesaro backdrops Regal but can’t break the grip.

Regal takes him to the mat again and tries the Regal Stretch but Cesaro makes the rope. A forearm from the good arm lays Regal out and a double stomp to the back of the head has the referee checking him. Cesaro looks down at Regal before picking up his limp body. He sets up the Neutralizer but thinks twice about it and lets Regal fall back to the mat. Regal tries to pull himself up so Cesaro puts on the Neutralizer. He looks down at Regal’s unconscious body and looks disgusted after pinning Regal at 24:00.

Regal is taken out by referees but Cesaro goes after him and extends a hand. Regal stares him down and shakes hands as we go off the air.

How Much Money WWE Saved Through Roster Cuts 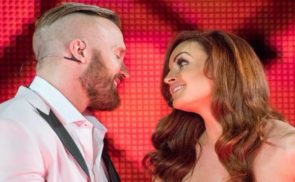 WWE Releases Updates, Who Was Furloughed, What Comes Next