We’re done with Worlds Collide and that means it is time to start the build towards whatever is next around here. Odds are that is going to be a big weekly show in a month or so, continuing a schedule that has severed NXT well. NXT has a fresh batch of stars from the UK here and now we get to see them full time. Let’s get to it.

We open with a long recap of Worlds Collide.

Here is Tyler Bate for a chat. He thanks the fans for having NXT UK’s back since the beginning, along with Bron Breaker for having such a great match. Cue Gallus to accuse Bate of letting the UK down and not being the Big Strong Boy anymore. The brawl doesn’t take long but Breakker runs in for the save.

Pretty Deadly brags about winning more Tag Team Titles when Lash Legend comes in to brag about them.

Back on Sunday, Cora Jade interrupted Meiko Satomura and mocked her before setting up a match between them. Well not quite actually as Satomura already has a match with Roxanne Perez.

Ash sends Dolin into the corner to start and hands it off to Doudrop for some heavy shoulders. It’s back to Ash, who is driven into the wrong corner so Jayne can pose a lot. Ash comes back with a chinlock to keep Jayne in trouble, setting up a swinging neckbreaker. Back up and Nikki gets knocked off the apron with Doudrop following in a bigger crash as we take a break.

We come back with Jayne grabbing a front facelock before taking Ash down with a neckbreaker. Ash fights up and gets over to Doudrop so house can be cleaned, including a double backsplash. Jayne has to save Dolin after a Cannonball so Ash ties her in the ring skirt for the hard forearms. Dolin goes up so Doudrop pulls her out of the air for a Michinoku Driver. The baseball crossbody finishes Dolin at 10:40.

Apollo Crews talks about Grayson Waller going for his eyes. Payback is coming.

McDonagh headlocks him down to start as we talk about the return of Braun Strowman to Raw. Back up and Lee kicks him away, only to get his neck snapped across the top rope. We take a break and come back with Lee fighting out of a chinlock. The rapid fire kicks to the chest and a double stomp to the back have McDonagh on the floor. Lee knocks him over the announcers’ table and takes him back inside for a Meteora. A hard knee rocks McDonagh again but he pulls Lee into a suplex. Another attempt is countered into a sunset flip but McDonagh kicks him in the face. The Devil Inside finishes Lee at 9:34.

Tony D’Angelo and Stacks are having coffee when Pretty Deadly comes in to join them. D’Angelo asks them how much it cost to get Damon Kemp to screw over Diamond Mine. Prince burns his mouth on the coffee before saying they did everything themselves.

Perez is looking rather nervous here and Satomura takes over on her arm to start. Back up and Perez sends her into the corner, setting up a headscissors into a rollup for two. Satomura pulls Perez down into a choke but vets reversed into an STF, causing Satomura to elbow her way to freedom. Perez sends is outside for a heck of a suicide dive and we take a break.

Back with Satomura pulling on both arms but Perez fights up and grabs a Russian legsweep. A Koji Clutch is broken up and Satomura hits a running spinwheel kick. Perez catches her up top with a super hurricanrana for two, giving us the shocked kickout face. Satomura has had it with her and comes back with a Pele kick into Scorpio Rising for the pin at 11:22.

Respect is shown post match but Cora Jade runs in to stick Perez down.

Tyler Bate and Bron Breakker are ready to take out Gallus.

Damon Kemp explains how he tore Diamond Mine apart from the inside because he didn’t like being left as the bench as a backup. He knew Roderick Strong and Julius Creed were going to explode and he stirred the pot. Then he took Strong out in the parking lot and cost the Creeds the Tag Team Titles. More on this next time.

Dyad tries to recruit Kiana James, who gives them a polite brush out. Then James runs into Arianna Grace, who seems to be what James was looking for. Someone hugged the Dyad as the women were talking.

Carmelo Hayes is on commentary. Ricochet kicks him to the floor and Hayes isn’t sure what to do early on. Back in and Ricochet starts cranking on the arm but Williams manages a pop up uppercut for two. Williams takes him outside for some rams into the announcers’ table, setting up a running neckbreaker for two more back inside. Ricochet fights up and hits a springboard crossbody into the Recoil into the shooting star press (with a stare at Hayes) for the pin at 5:13.

Tony D’Angelo and Stacks are still having coffee when Cameron Grimes walks past. Grimes says they’re just like Joe Gacy and he still doesn’t need anyone. D’Angelo throws an insult so Grimes throws the coffee, earning himself a Rock Bottom through the table.

Sol Ruca, a surfer, is coming.

First match in a best of three series. They trade wrist control to start before Frazer reverses into a headlock, allowing them to flip up to their feet. Frazer dropkicks him to the floor for a dive and we take a break. We come back with Axiom sending him to the floor for a suicide dive before starting in on the arm back inside.

Frazer fights up again and hits something like AJ Styles’ moonsault into a reverse DDT for two, followed by a Sling Blade. The running shooting star hits knees though and Axiom pulls him into a triangle choke. Frazer makes the rope and pulls Axiom into a half crab, followed by something like the old Haas of Pain to send Axiom to the ropes as well. Back up and Axiom hits a jumping kick to the face for the pin at 11:42.

Javier Bernal annoys Hank Walker (security guard) and a fight nearly breaks out until Walker goes to escort Gallus to the ring.

Quincy Elliott is here next week.

Here’s what else is coming next week.

Mark Coffey is here with Gallus. Breakker headlocks Joe Coffey to start and takes him down in the corner before handing it off to Bate. Joe gets over for the tag off to Mark so it’s a double suplex to drop Gallus. We even get an old school Steiner pose we we take a break. Back with Bate hitting a big dive to the floor but a Wolfgang distraction lets post Breakker to take over again.

Back in and the rib work begins, including some forearms to the ribs and a chinlock. Mark grabs a bearhug but Bate slips out and goes through the legs to set up the hot tag. Breakker comes in for the spinebusters and a Steiner Bulldog gets two. All The Best For The Bells is cut off with a spear and the Tyler Driver 97 finishes Mark at 10:51.

Post match the winners celebrate but JD McDonagh runs in to take them both down, including a big beating to Bate to end the show. 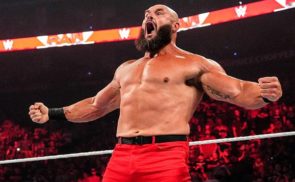 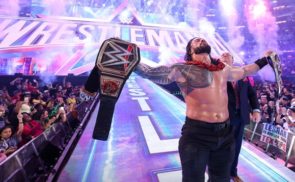