This is a special show as we’re on the USA Network as part of WWE Week. It’s the first time that the modern version of NXT has aired on TV and there’s no way to guess how well this show is going to draw. That being said, it’s a big time show with a qualifying match for the upcoming four way #1 contenders match. Let’s get to it.

We open with a look at the NXT Title situation and the four way #1 contenders match being set up last week.

Non-title. Aichner beat Almas a few months back before Almas won the title. Almas dropkicks him down to start but charges into a tilt-a-whirl backbreaker. The champ bails to the floor but gets caught with a HUGE springboard dive. Back in and a tornado DDT gets two on Almas, followed by a hard powerbomb for the same. They head outside with Almas sending him into the steps as it’s time to get fired up. Back in and the hammerlock DDT puts Aichner away at 2:15.

Video on Ember Moon, including her rise to the Women’s Title.

Burch slugs away at Akum to start and everything breaks down in a hurry. Burch and Lorcan both hit running shots in the corner but Razar runs Lorcan over. A death valley drivers into the corner sets up the Super Collider and the Last Chapter ends Lorcan at 1:18.

Next week: Tyler Bate vs. Pete Dunne for the UK Title and Undisputed Era vs. Sanity for the Tag Team Titles.

Sanity says they haven’t left the battlefield and next week, they’ll finish what they started.

Adam Cole is ready to win the NXT Title.

Black gets him to the mat for a headscissors but Cole easily flips out for a pose. Back up and Black calmly drops him before firing off the rapid strikes. A knee to the head has Cole bailing up the ramp. We take a break and come back with Cole driving him down into a Crossface until Black gets over to the rope. Cole manages to pose but Black doesn’t think much of the trash talk.

Back up and Black starts the strikes, including the running kick to the head. The springboard moonsault drops Cole again but it’s too early for Black Mass. Instead Cole goes up but dives into a kick to the head for two. A jumping enziguri sets up Cole’s Backstabber for two more and we hit that NXT chant. More kicks to the head rock Black and the fireman’s carry backbreaker gets two more. Black blocks a low superkick though and knees Cole in the jaw. Cole: “WHAT DO YOU GOT???” Black Mass ends Cole at 11:15. 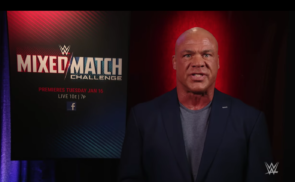