After today’s record setting number of releases, it might be nice to have things get back to normal, meaning we’re in an empty arena with a different set of commentators. Last week saw Johnny Gargano win the final battle against Tommaso Ciampa, but the question now is what happens with Killer Kross and Scarlett Bordeaux, who were watching at the end of last week’s show. Let’s get to it.

We open with a recap of last week’s ladder match and Gargano vs. Ciampa showdown.

Marcel Barthel is here with Aichner. Balor headlocks him to start but Aichner reverses into one of his own as they’re going technical to start. Aichner tosses him into the corner and slowly stomps away but Balor is back with a basement dropkick. Balor sends him outside and into the barricade as we take a break.

Back with Barthel grabbing the leg so Aichner can get in a tilt-a-whirl backbreaker. Some hard whips into the corner make Balor’s back even worse and Aichner gets two off a clothesline. Balor hits a Sling Blade but has to deal with Barthel, allowing Aichner to hit a toss powerbomb. The running knee to the steps only hits steps though and Balor Sling Blades Barthel. A dropkick sends Barthel through the barricade and Balor avoids a moonsault back inside. The John Woo dropkick sets up the Coup de Grace and 1916 to finish Aichner at 11:48.

Charlotte talks about how awesome she is and how she has dominated the past, present and future of wrestling. She has already defeated the past and present, but what about the future? Charlotte wants to face Mia Yim, who was actually her first opponent in NXT. Now she wants Mia to have the first title shot. Then it’s on to anyone else William Regal lines up and Charlotte will beat them all. Io Shirai wasn’t mentioned by name.

This was supposed to take place a few weeks back but Io Shirai jumped Xia. A kick to the chest puts Aliyah on the floor to start but she uses a referee distraction to kick Li down as well. More kicks and a chinlock keep Li in trouble but Aliyah misses a charge into the corner. A running fish and dropkick both drop Aliyah again and the spinning kick to the back gives Li the pin at 3:15.

Video on the tournament for an Interim Cruiserweight Championship. It’s a round robin format for a change with the winners of the two four man blocks meeting for the title.

They fight over wrist control to start with Tozawa flipping out of a wristlock and snapping off a hurricanrana, with Scott landing on his feet. A chop makes Scott stand up straight and a pump kick puts him on the floor. Scott is back up with a rather missed headscissors to the floor (his feet grazed Tozawa’s face and Tozawa flipped forward anyway) to send us to a break.

Back with Tozawa’s running flip dive off the apron taking Scott down and a missile dropkick gives Tozawa two. The Octopus goes on but Scott breaks out in a hurry, meaning Tozawa goes to a guillotine instead. Scott muscles him up into a suplex for another break before muscling him up into a German suplex. The House Call gets two but Tozawa sends him hard into the corner. Trouble in Paradise drops Scott again and the top rope backsplash gives Tozawa the pin at 11:26.

Video on Hijo del Fantasma, who is coming to become the new Cruiserweight Champion.

Gonzalez has Dakota Kai with her and starts fast by lifting Nox up by the arm. A shoulder drops Nox again and Gonzalez holds the arm just to be safe. The backbreaker drops Nox again and we hit the chinlock with a knee in the back. That’s broken up so Gonzalez sends her into the corner, allowing Kai to get in a cheap shot for two. Cue Shotzi Blackheart to take care of Kai so Gonzalez goes after Shotzi, allowing Nox to grab the rollup for the pin at 3:15.

We get a biography video on Keith Lee. He has been doing this for a long time now and stood out in Evolve because he was a bigger guy who could do a lot of impressive things. Now he’s here doing the same, and has gone on to appear at Survivor Series and the Royal Rumble. Then he won his first singles title to start the year because his time is just starting.

Miles continues to get some big intros, complete with a cool hat. Lumis stands in the middle to stare at him and Miles isn’t sure what to do. A hard forearm to the back drops Miles as the slow, creepy beatdown is on. Some dropkicks stagger Lumis but he hits a spinebuster into a head and arm choke (called the Anaconda Vice) for the tap at 1:45.

Adam Cole is not here for his scheduled showdown with Velveteen Dream. Whether he accepts it or not, Dream does not deserve a shot at the title and what matters at the moment is protecting Cole’s reality. The reality of the world right now is no one deserves a shot at the NXT Title.

Here’s Velveteen Dream and he’s looking a bit upset. He says this was typical Cole and of course he doesn’t believe Cole. Dream does respect Cole for thinking of himself as the mastermind and leader of the Undisputed Era. The one thing Cole is is the last remaining champion of the Undisputed Era.

Cole might even be the best NXT Champion of all time, but he needs to understand the words Dream Over. Cue Finn Balor, who says he doesn’t know or like Dream but he doesn’t like hearing anyone else being called the greatest NXT Champion of all time. Ignorant comments will get you a date with the Prince. Dream says Balor can be a gentleman and pick him up next Wednesday.

Malcolm Bivens is interested in the main event because the winners are losing the Tag Team Titles to his men.

Riddle is defending with a mystery partner chosen by his regular partner Pete Dunne. That partner would be….the debuting Timothy Thatcher. It’s Bobby Fish and Roderick Strong for the Era here for a different pairing. Riddle and Fish start things off and the trash talk is on in a hurry. Fish gets annoyed so they go to the mat in a hurry where he can’t get a rollup. Instead, Riddle slams him down to send Fish bailing as we take a break.

Back with Thatcher tying Strong up and grabbing a bow and arrow to induce screaming. Strong gets out and brings Fish back in to grab Thatcher’s leg and stomp down on it to take over. Thatcher reverses into a hold of his own and drags Fish over to Riddle. That means a suplex into a running kick to the chest for two, followed by the Broton for a bonus. The rolling gutwrench suplexes have Fish rocked and Thatcher adds his own to Strong.

An assisted moonsault gives Riddle two but Thatcher gets pulled to the floor. That lets the Era take Riddle into the corner so Strong can hit a backbreaker. The double teaming continues on the floor….as Dexter Lumis is watching from the top of the arena. An assisted Angle Slam plants Riddle and we take another break.

Back again with Fish hammering away at Riddle and grabbing the front facelock. Riddle finally gets in a fisherman’s suplex for the hot tag to Thatcher. Some spinning belly to belly suplexes have the Era in trouble and a Fujiwara armbar sends Strong bailing to the ropes. Fish comes in for some strikes to slow Thatcher down and a running forearm gets two. A knee to the face gets the same but Riddle breaks up the High/Low. The Fujiwara armbar is enough to retain at 22:12.

Tommaso Ciampa says he is done with all of this and yes, Johnny Gargano was the better man. He gets jumped from behind though, sending the camera flying, and it’s Killer Kross, who says tick tock. There is also a woman’s boot shown standing next to Ciampa. 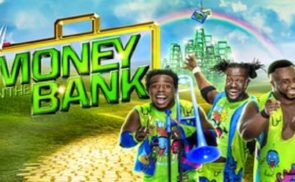