Last week’s show was hardly inspiring, meaning the trend continues around here. The show has once again become little more than a collection of matches without much rhyme or reason and that makes it hard to figure out what you are going to see from week to week. Maybe this week can be an upgrade so let’s get to it.

Chase U is here with Hayward as usual. Hayward goes right after him to start and knocks Dempsey into the corner before taking him down by the wrist. Commentary says that Dempsey is a second generation star but doesn’t mention the first generation.

Dempsey powers up and hits something like an AA but Hayward stays on the wristlock. With that not working, Dempsey fights up and pulls him down into something like an STF. We’ll make that a regular armbar but Hayward is back up with some forearms, including the running version. Dempsey pulls him into a Fujiwara armbar though, which he shifts into a Regal Stretch for the tap at 7:41.

The rather athletic Ruca (Nigel: “She takes after her grandfather, Argentina Ruca!” Shah: “I don’t think that’s true.”) grabs a headlock to start. Back up and Ruca cartwheels forward and grabs the headlock again but Feroz fights up and takes her into a wristlock. An exchange of arm cranking on the mat goes to Ruca as she pulls Feroz into the air. That’s reversed into a choke until Feroz pulls her down into a backslide for the pin at 5:53.

Tony D’Angelo is here with Stacks. They fight over a lockup to start and take turns driving each other into the corner. Jiro works on the arm and snaps off some armdrags but Stacks PULLS OFF JIRO’S JACKET! That doesn’t work for Jiro, who takes it right back and sends him outside. Back in and Stacks drops him again before working on a cravate. That’s broken up and Jiro comes back with the jacket punches into a falling jacket punch for two. An Iconoclast out of the corner sets up a missed Ikemen Slash and Stacks kicks him in the face for the pin at 5:16. 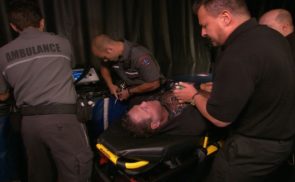