He’s worth the wait. There have been a lot of surprising returns in WWE as of late, with wrestlers ranging from prospects to former World Champions coming back to television. It has made for some great moments and leaves fans wondering who might be coming through that curtain next. WWE is running out of big names to bring back, but now it seems that they might have plans for a big one.

According to Xero News on Twitter, Bray Wyatt’s WWE return is seen more as a matter of when rather than if. The question instead is how big of a debut does WWE want him to have, as bringing him back on a random Monday Night Raw or SmackDown or a B level event would lower his impact. Wyatt was released from WWE in the spring of 2021 and last wrestled at WrestleMania 37.

Source stated last night its more a case if When Bray returns to WWE than If he returns.

It is believed due to how big of a return he will be it wont be some random raw/sd or secondary PLE.

HHH is keeping all returns secret only a few people in the business know.

Opinion: A Wyatt return would make sense and I can see the logic behind not wanting to waste him on a show that won’t feel special. Wyatt is probably the biggest name of all of the released WWE stars in recent years and it would be cool to have him back. That being said, WWE needs to figure out what they want to do with him and go with it, because the stuff he had been doing in his final months with the company was shaky at best.

What do you think of Wyatt? How could he be used in WWE? Let us know in the comments below. 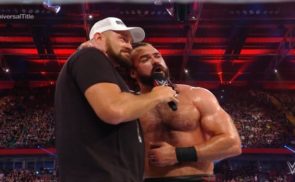 WRESTLING RUMORS: You Weren’t Supposed To See Something At WWE Clash At The Castle